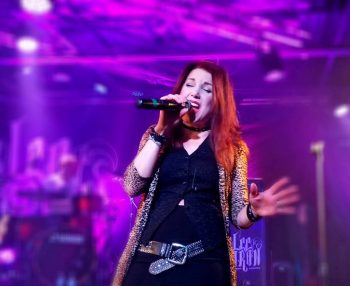 Karen Greening, better known to Canada and the world as Lee Aaron “The Metal Queen”, just finished a three date concert stint. The shows, Ottawa, Toronto, and Niagara Falls saw Aaron supporting her latest album Diamond Baby Blues. The album, reviewed by my CGCM Podcast co-host, Wallygator also made his top ten of 2018! Check out Wally‘s words here: Lee Aaron – Diamond Baby Blues (Album Review). I personally have witnessed Aaron on stage in a few instances over the years. One gig in Whitby, Ontario in 2014 really went over well and my review even turned up on the Lee Aaron website. Lee Aaron Whitby (Concert Review).

Friday, February 15th’s performance saw Aaron and co at Toronto’s Rockpile Nightclub. To be completely and totally honest, Aaron was the best she’s ever been. Well, the best I’ve ever seen her. After nearly 40 years, Lee Aaron‘s voice has not lost an ounce. In fact, it’s matured and become probably better than it ever was! The velvet tones that she doled out upon a pretty jammed Rockpile crowd held every single sole in trance for 90 minutes. How Aaron‘s voice can still sound this amazing is a mystery but wow. Just wow! 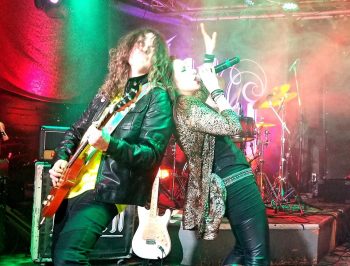 And her band too is a well-oiled machine. From the guitar wizardry of possibly the hardest working Canadian musician Sean Kelly, to the thunderously thumping basslines of Dave Reimer and driven forward by Aaron‘s husband John Cody behind the kit. Led of course by Aaron herself at centre stage, these folks obviously enjoy playing together. It shows on stage. It flows through the music. And it takes you along for the ride.

After stage setters, Jaded Edge (featuring CGCM Podcast co-host Wally Norton), Barstool Confessions, and CGCM Podcast friends Heavens Fire, Aaron and her band thrilled the packed house for about 90 minutes. Opening with “Black Cat” from the latest release Diamond Baby Blues, Aaron let loose on the crowd. Throughout the set, we were treated to a total of five from the release. Along with “Black Cat” was “Diamond Baby”, “American High”, “I’m A Woman” and “My Babe” (in a great encore show closer). All the big radio smash hits were of course present. We raised our fists and sang along in unison to “Metal Queen”, “Hands On”, “Some Girls Do”, “Sex with Love”, and “Watcha Do To My Body”.

Really connecting with the audience is something that seems to come naturally to Aaron. From plucking a hat off the head of CGCM Podcast listener Dave Wood and sporting it during “Sex With Love” to calling out a male fan for singing the words to “I’m A Woman”, letting him know it was OK for guys to do so. Aaron also quickly shut down a heckler (who screamed out “You’re fucking hot!” to which Aaron replied without a step missed, “Yes it is hot up here tonight!”).

She commented on the makeup of the audience considering that there were a fair number of younger folks in attendance. She also commented on how nice it was to see a large number of women given that in the old days her audience would be mainly men. Many of Aaron‘s song themes are to do with women’s empowerment (“Metal Queen”) or gender equality (“Some Girls Do”). So this could account for the different audience mix. In any case, it was great to see and the amount of turnout in general at The Rockpile. All in all an excellent show, thank you to Lee Aaron and her entire band for keeping rock and roll alive! Now I wish I could have gone to the Niagara Falls show as well! 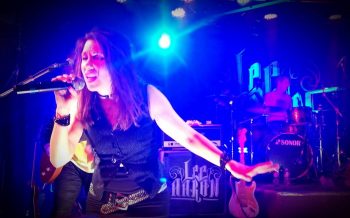 Lee Aaron also participated in CGCM Podcast‘s B.B.B. Contest. A tournament consisting of 16 Canadian rock royalty battling it out by choosing a playlist from specific years and having the CGCM listeners vote blindly on which list they prefer. The tournament has been whittled down to two finalists, Lee Aaron vs. Stevie Skreebs (Brighton Rock). Watch for that audio podcast episode coming soon, listen and cast your vote.

Thanks to Chris Preston for the use of his photos!

Hello again Ladies and Gentleman  Dr. Tardis is back! Sooner than expected. Yup! Shortly after having witnessed Rammstein dominate the world stage I told myself all other rock shows will be mediocre. Well, thanks to Scorpions I stand corrected! Scorpions has been on my bucket list since I was kid. Growing up in a small town […]