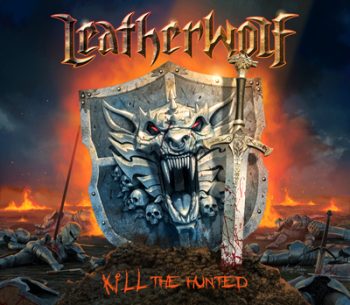 The TRIPLE AXE ATTACK is having a stellar return ever since the release of LEATHERWOLF’s latest mid-summer smasher “Hit The Dirt“. Not only could the single surprise with a killer line-up comprising drummer Dean Roberts, the combined guitar mastery of Rob Math, Luke Man and Wayne Findlay (MSG, MS’ Temple of Rock, Slavior, Vinnie Moore) as well as Barry Sparks (MSG, Dokken, Yngwie Malmsteen, Ted Nugent) wielding the long axe – it also marked the day LEATHERWOLF’s new singer Keith Adamiak got revealed to en bloc acclaim from both fans and critics. “Hit The Dirt” quickly became a tremendous success for the band that’s been fondly described as one of the most underrated classic heavy metal acts by fans around the globe.

Copied by quite a few but then mostly degraded to a platitudinous on-stage gimmick, the triple-guitar feature was truly baked into the LEATHERWOLF DNA from the very beginning, laying the foundation for each of the band’s compositions like a mindset that cannot be tacked on. Their latest single “The Henchman” – literally new old stock from the ‘80s that was never before finished and recorded – proves all that once and for all. From shredding unison all the way to going threeways with big-ass confidence, mounting exceptional twin soloing on top of a smooth acoustic run – the individual paths that three guitars are being taken on here have been plotted carefully and with extraordinary musicianship.

Maneuvering elegantly between half-ballad and the old-school proggy aggression that’s been a hallmark of American metal – and of LEATHERWOLF in particular – newly inaugurated singer Keith Adamiak took on an uphill battle against the Rob Math-led guitar assault, with special guest Joel Hoekstra (Whitesnake, TSO) also contributing to the six-string madness. However, bolstered by one of the most incredible young voices in heavy metal with an insane vocal range and bursting from rage and tons of soul, he shows true grit and turns out a clean winner on his way to becoming a fan favourite.

“The Henchman” is a song that purposely feels like an epic journey through contradicting emotions and therefore greatly benefits from Keith and his strong presence. It’s a musical bridge after all and in several ways: connecting the young with the experienced, the past with the present, but also the outward with the inward, as band leader and drummer Dean Roberts describes: “The Henchman is all about conquering your destiny but doing so with grace and dignity so that we don’t become the man we’re running from. Some people go throughout their entire life without being able to connect with themselves deep enough to figure out how to get past their ego. But the main reason is because they didn’t know they had to look within. Hopefully, this song can help individuals realize they have the power to be anyone they want and not let past traumas define them”.

Lastly, “The Henchman” bears analogy to a caravan of struggles the band went through, and to how those have been overcome by taking said look within to find the right choices for Kill The Hunted. The new line-up has been built with a clear goal in mind: to form an interconnection back through time while making good use of that time traveller effect where you take your present set of experience, skills and techniques along when visiting the past. Teaming up with iconic metal producer Randy Burns (Megadeth, Kreator, Helstar), who helped shape LEATHERWOLF’s head-turning 1984 debut EP, expanded to a full-length LP and titled Endangered Species for international release, and having Tom Baker (Judas Priest, Mötley Crüe, Pantera) master this feature-rich beast of an album were just two of many consecutive decisions.