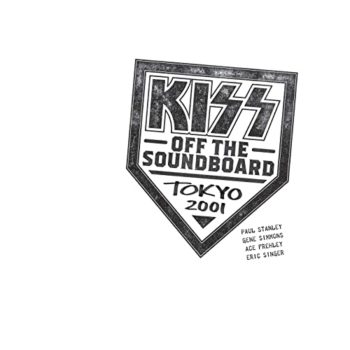 KISS Off The Soundboard

One can hardly believe it these days but there is a new KISS album on the shelves in 2021!  Okay…maybe not new material but a new live album with a twist.

KISS has released Off the Soundboard – Tokyo 2001. Apparently, the first to come of a series is official live bootlegs from the masked heroes of the rock stage. As much as I would have preferred a new studio album, I cannot see this ever happening again from the foursome that makes up KISS today.

The cracks of old began to rear their ugly, yet familiar head with the reunited band. Peter and Ace started to make some mistakes that reminded those around them, and the fans of the olden days of the errors that led to the demise and initial separation of the original four KISS members.

While the infamous guitarist decided ultimately to stay, the moody kitten decided to call it quits once again. This led to Paul and Gene bringing back Eric Singer to rejoin, and don the Catman makeup, and thus creating an installment of KISS of only three original members. Featuring the fantastic guitar tones of the incomparable Ace Frehley, combined with the slamming drums of Eric Singer, where can you go wrong here!  On no other album has this combination been heard, and trust me on this, it needs to be heard! 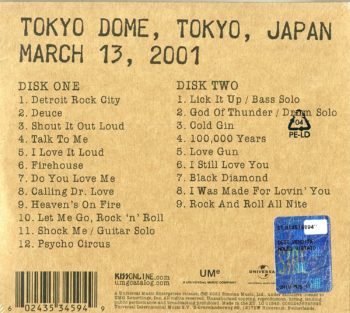 If anyone is looking for any rare tracks or off-the-wall tracks your not going to find it here. Yes, it’s the typical song list from KISS but the energy here is over the top. Something about this show, whether it be the Ace and Singer combo or just because it’s a new (sorta) album from KISS it’s here.

You still have your great songs that everyone knows and yes mostly the singles and hits but does that matter?  It’s KISS!  The one that stands out the most is for this listener is “Let me Go Rock and Roll”. You can really hear Gene’s bass here and it sounds great. Paul’s vocals are still good at this time, and he sounds like the pivotal frontman he is but you can still catch the odd flat note.

Ace is Ace. He is just doing what he does best and that’s enough for me. You can really hear the enjoyment in his voice when he steps up to the mic for his penned song “Talk to Me”.

The real treat is having Eric Singer behind the drumkit and in the Catman makeup. As sacrilege as some find it, the makeup isn’t the one playing drums!  It’s the man, and man can he play! 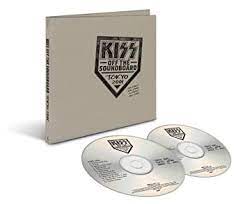 Some might just consider this yet another Alive album, and while it is a live show it’s more than that. Now with this being “off the soundboard” does that mean it’s pure and raw with absolutely no touch-ups?  Being KISS I highly doubt it but that doesn’t detract from the album at all. It still has that pure and exciting feeling that everyone gets seeing KISS live. Also, you can catch the odd flat note or mistake, so who knows if it is pure or not.  KISS once claimed the infamous Alive was untouched, and we all know better now!

As a KISS fan, I am just happy to get something (somewhat) new from the KISS camp. It’s a great day when you realize that they might be retiring, but they realize that they can take another path to appease their ever-hungry fan base.

I truly hope that they come out with other albums for the Off the Soundboard series and keep the name KISS alive for another decade and make it about the music, not the personas that they have created over the last 45 years!