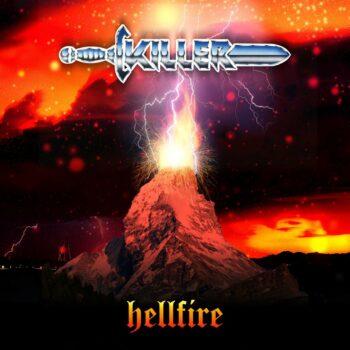 In the history of Belgian heavy metal, there are just a handful of bands that stand apart as being influential and impressive. Of these, Killer are perhaps the most important of all.
While there have been others – most notably Acid, Ostrogoth and Crossfire – who have all made an impact, it is Killer who are regarded as the most influential name to come out of Belgium’s heavy metal scene.

Our heavy metal heroes originally formed in 1980, by Paul “Shorty” Van Camp on lead guitar and vocals, “Fat Leo” on drums and “Spooky” on bass guitar and lead vocals. Inspired by the UK’s burgeoning New Wave Of British Heavy Metal scene that gave us Iron Maiden, Saxon and Diamond Head, Killer’s heavy and aggressive sound, alloyed to their power trio format, led to favourable comparisons to Motörhead. After a mere four months, they released Ready For Hell on WEA, becoming a cult draw across Europe. (text from Cherry Red Records)

Hellfire was produced by Shorty & Vanne