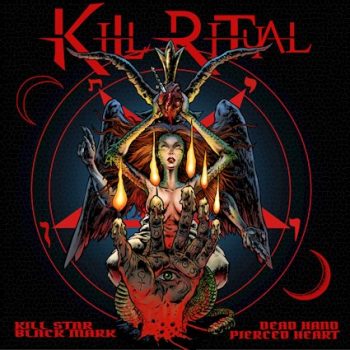 The metal outfit KILL RITUAL has issued the first single from their upcoming album. Kill Star Black Mark Dead Hand Pierced Heart is releasing on October 28 in the EU and November 18 in the USA.

The single is called “The Whore Of War“, and is accompanied by a lyric video that’s available for your viewing pleasure below. You’ll also find a selection of streaming links here.

“This song is about war and the pursuit of glory and wealth through the killing of others. War is a tempting mistress and promises a lot, but she always takes your soul. There’s always a given no matter where man is in the history of time and that’s the lust for wealth and power.”

Kill Star Black Mark Dead Hand Pierced Heart was mixed and mastered by Andy LaRocque at Sonic Train Studios, and will be available as CD Digipak, limited edition vinyl LP as well as in digital formats. You can already pre-order the album through the link below.

Get ready for an album full of memorable melodies, rocking riffs, dynamic songwriting, and a lot of speed and power!

KILL RITUAL‘s new album will be released in the US on November 18th and in the EU on October 28, 2022, via Massacre Records.