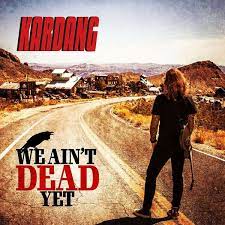 Kardang – We Aint Dead Yet

Here at CGCM, we love to help promote new and upcoming bands.  October 18, 2021, is the day that I first heard of Kardang. Henning messaged me on Facebook asking if he could send me a song to see if I could play it on my radio show. I host the “Power Chord” here on CGCM Rock Radio Mondays at 4pm -6pm EST and the show replays Thursdays @ 12pmest and Sundays @ 4 am EST. He sent over “We Ain’t Dead Yet”. Well, let me tell you I just loved the song from the first time that I heard it. I became an instant fan.

He then sent me the song “Magic” and like the previous song I just loved it. This one maybe a bit more. These 2 songs became regular songs that I would play on my show. Fast forward to this year and to my pleasant surprise Kardang were releasing a new song every Friday until all the remaining songs from the album were out. Each week came and I couldn’t wait to hear what the song sounded like. I can honestly say that I liked them all.

Here we are a few months later and they have released a full album called We Ain’t Dead Yet. I haven’t written a review in quite some time and what a great album to kick me in the ass enough to want to write a review. So here goes. Kardang – We Ain’t Dead Yet Album review.

The rhythm section of Drummer Fredrik “Freddy” Gyland and Bassist Terje “Terry Hammer” Hamar is just outstanding on this release. The drumming on “Face to Face” really stuck out to me and I loved it on that song.

The flow of the album is also really good. There are no filler songs on this album. There are two slower-paced songs and they fit really well they don’t take away from the enjoyment of the album.

The songwriting on this release is also really good. The choruses are memorable and you can’t help but sing along. Songs that I would highlight as good are “Face to Face”, “Guilty Pleasures”, “Woman Like You” and “Touchdown” that has a great summertime vibe to it. 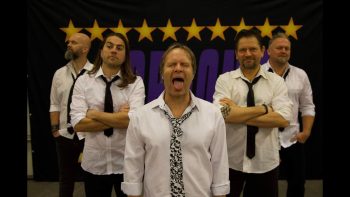 The guitar intros really set up the songs perfectly. Most have that AC/DC feel to them and also give the songs a great sound sonically.

The production is really nicely done. Every song sounds great.

Cindy Kvinlaug provides additional vocals on “Roll Baby Roll” and that just adds an amazing touch to that song. Hearing her and Owe together really makes the song a winner. It just works. Other songs that I would list in this section are “Piece of You” and “Black Sky” which also has a great vocal performance by Owe.

The vocal performance by Owe “Chris Williams” Wilhelmsen, is outstanding on this album. Owe has the perfect voice for this type of music. It just fits right. He really delivers on this release.

The guitars. Wow, what can I say? I just love the guitar work from John Kåre “Jonkis” Werdal and Henning “Boogie Silver” Sirnes. The riffs, the solos, just amazing.

Best songs of the album for me are “We Ain’t Dead Yet”, “Junkie Jane”, “Turbo Prince” and “Magic”.

All the songs on this album are solid, great fun lyrics “sit on my face and scream my name. Touch my snake I’m gonna make you shake” from the song “Magic”. The videos are done really well. Vocals and guitar work is beyond impressive. Solid rhythm section. Great production. As I have said to Henning “2022 is the year of Kardang” let’s hope they get some great exposure and land that well-deserved record deal so that the rest of the world can catch up to hear what a lot of us already have. Check out their Spotify and iTunes pages to pick up the album and listen in to CGCM Rock Radio where you can hear Kardang as well.