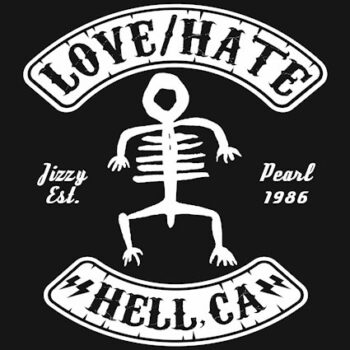 Hell, CA (also the title of a song from the band’s debut album) is the first album since I think 1999’s Let’s Eat to bear the moniker Love/Hate albeit fronted by the name of singer Jizzy Pearl. The band as was, exploded to fame around 1990 with the release of the magnificent and utterly bonkers Blackout In The Red Room in which the gigs promoting it were the stuff of legend (including a night in Glasgow where the floor ended up with a bloody massive hole in it due to the crowd going batshit crazy, which was slightly dangerous as the venue was above a bar). Perhaps partly due to musical changes and labels looking for other styles of music for hits the band eventually called it quits. Singer Jizzy has been doing his own thing as well as fronting other bands at points including LA Guns, Adler’s Appetite and Quiet Riot, being it would seem the man to go to! Now, however, he is releasing an album that captures the magic of the original outfit whilst sounding fresh and new. The band (as far as I am aware) comprising of Stevie Pearce (guitars), Christian Kimmet (bass) and Charles Evans (drums) do a sterling job, with the rhythm section being as solid as a rock and Stevie throwing out riffs and solos aplenty, all of which seem to match the song each time. The album features 10 songs with most around 3 or 4 minutes and the last song clocking in a little longer at just under 6.

“One Hot Minute” starts things off. With a jangly guitar which slightly reminded me of the opening of “Backstreet Symphony” by Thunder with a thudding beat under it, before Jizzy goes “3, 4” and the whole band kick fully into gear. When the vocals start it is quite something. I have no idea what he does to preserve his voice but whatever it is it works. He sounds like he did years ago. There are plenty of little guitar lines thrown around to keep the song entertaining as well. “Acid Babe” has that stop/start thing going on with the music pausing for Jizzy to start a line but coming back in before he finishes it. There is some fine shredding going on guitar-wise as well! Oh, and did I hear cowbell? The chorus takes things down a little and is like many tracks on here easy to join in with.

“Gonna Take You Higher” is one of a couple of tracks that starts acoustically, just for a short while before it boots its way in fully through the door with a stomping heavy groove. It is a 1970s bluesy rocker and sounds brilliant. There is some ebb and flow, little moments of respite breaking things up in this hard-hitting rocker. The guitar opening of “Soul Mama” is pure “Highway To Hell” era AC/DC although some of the riffage is reminiscent of Led Zep in their pomp. This is old-school rock ‘n’ roll/hard rock with plenty of bite and swagger.

“Hard To Say Goodbye” could be the best song lyrics I have heard from this band. Lyrically dealing with the death of a close friend, this captures both the pain and anguish whilst still having a defiant and almost optimistic side to it. “I wish you were here my friend” he sings adding “all that is left is a gaping hole” but he then sings “I’ll see you on the other side, other side“. The song adds a note, or a reminder to all, of us listening to make sure we tell those we care about that we love them before it might be too late. This however is not a slow ballad but a rocker, perhaps the opposite of the song “Don’t Fuck With Me” from way back which sounds like it should be a balls to the wall rocker and yet was an acoustic ballad. Seems Jizzy likes fucking with the listeners’ expectations! The chorus on this will cause mass singalongs at gigs without a doubt. 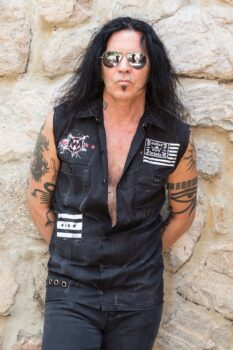 The Man Himself: Jizzy Pearl

“When You Gonna Come Home” has a slower dirtier groove running through it. The guitar soloing just flies over the top of it, with the main lead solo being very bluesy. Lyrically it sounds like advice to someone who is away to seek their fame and fortune, that is to go home before it all goes belly up. The ending on this is lovely with backing harmonies going “aaahhhh” over a solo whilst Jizzy wails over them all. Splendid stuff. “Last Chance” is another where I found the lyrics really interesting and reflective. Opening with “it’s my last chance for humanity, for sanity” before continuing “I fucked the whole thing up, oh yes I did“. The line I most liked was the reference to the “book of my life, some of the pages are frayed“, which rings very true. Musically this is a swaying track, with an acoustic opening with an appropriate guitar solo that soars, sounding hopeful and having plenty of feeling. “Bruised And Battered” is more of a sleazy rocker with a guitar sound at points (around the solo) that reminded me of Billy Duffy from The Cult.

Jizzy even manages to go all James Brown during “Wanna Be Somebody” as he encourages us to “take it to the bridge” several times! Once again there is a stop/start riff which is fun to headband along with. Lyrically perhaps about someone who wants to be famous, not by means of any talent but due to who they are dating, the comment about using a “human sacrifice” in their attempt perhaps suggesting that the partner is just being used and is likely to be thrown away at the first opportunity. The chorus is melodic and the verses more intense. Another in a series of great groovers throughout the album. The last track “Lonely Days Are Gone” as mentioned earlier is the longest here. Jizzy summons his Robert Plant during his “baby, baby baby” refrain over the guitar lick. This is very 70s hard rock with a heavy blues feel. It has a slower groove but guess what? It still bloody grooves! It does speed up at around the 4-minute mark with Jizzy singing the title on repeat over a guitar solo and backing vocals doing the “yeahs“. It is a big hard rocking ending to the album with a final drum flurry. Great song.

A Rollicking Bunch Of  Songs:

It may have been a long wait for a new album with the Love/Hate name but it is worth it. This would have been a killer follow-up (in my opinion) to Wasted In America whether the record labels cared or not. The songwriting is certainly more thoughtful here than some of the 90s output but it is a rollicking bunch of songs that capture the head, the feet and even the brain. It is interesting to hear some more of the bands (or Jizzy‘s himself) influences and to hear just how versatile his range is. His voice is in superb shape, you honestly could think this was recorded 30 years ago due to how it holds up. A triumphant and indeed welcome return.

The album is out on Golden Robot Records on Friday 11 March.

Check out my other articles and reviews here: Tom