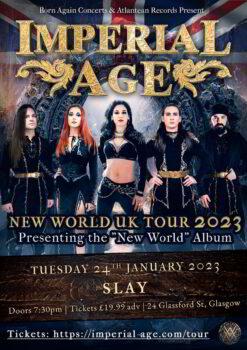 Definitely Happy To Be Here

After 3 and a half years and several changed dates, Russian symphonic metal outfit Imperial Age made it to the UK and started it all in Glasgow Scotland. The first two things to be said are firstly how much the band were absolutely thrilled to be here (I think they are delighted to be performing onstage once again in general) and all 3 singers mentioned how they felt about it.

Mezzo-soprano Jane Odintsova said that they had driven all night and day to get to Glasgow so had no sleep and very little food and the only thing keeping them going was the crowd’s reaction. Soprano singer Anna Moiseeva also added that she was happy to be here for us and glad we were there for her. Tenor Alexander Osipov was even clearer thanking those who have been holding their tickets for “3 fucking years” to see the band and how much that has encouraged them to know of the strong support of the fans. From watching them it was easy to see how much it meant to them, at points their emotions were clearly on view.

The second thing to highlight is Imperial Age have an amazing attitude and fortitude, dealing with all sorts of adversity to deliver these shows. Other bands may have cancelled, but not these folks. This time the shows were going on hell or high water. They had to audition online for a guitarist for this leg of the tour and they only met him in person 24 hours before the show. Then just before they were heading over, there was a visa problem for bassist Dmitry Safronov. The German office issuing his UK visa accidentally destroyed it!!! Now they had no bassist. So they picked up one in Holland who is doing the shows until Dmitry can get here.

As Alexander said, “there was no fucking way we were going to cancel or postpone. We were doing these shows“. As an aside the last time I saw this band Alexander had his arm in a sling and he had to do the shows one-handed. As I said, the band have plenty of fight in them. A huge amount to admire about them as people. Thankfully as an outfit they also have the musical chops and songs to also admire.

A Look At The Set 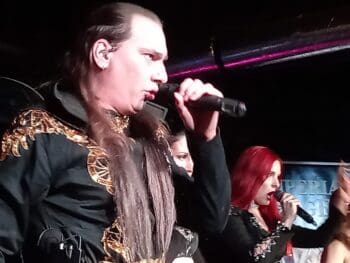 some choice cuts from their previous 2 studio albums (they do also have an EP, a couple of singles and 2 live albums) meaning they played a nice long set for the fans. It was a well-constructed set list floating between the albums keeping it interesting.

They opened the show with the first track on the album “Windborn” (sadly due to buses I had to leave before the last song which I believe was “Call Of The Towers” which means they topped and tailed the show with the first and last tracks of the album). This seafaring shanty has a strong chorus and sways along in an upbeat fashion. “The Monastery” highlighted the 3 singers as they interplay, trading lines in character and then having moments of vocal harmonies showing how well they perform individually and as a group.

I must say that the opening lyrical delivery by Anna is stunningly beautiful. The band requested our hands in the air at the start and looking around there seemed to be plenty joining in with their petition. This was also where time was taken to introduce the new guys, on guitar from Fife in “Bonnie Scotland” as Alexander called it was Ryan Thomson and very new guy Tim on bass (didn’t get his full name, apologies).

There were a couple of songs that explored the issues of the war going on now and the effect on them personally being Russians, and once again their sadness at the fact a couple of them have had to leave their home country. 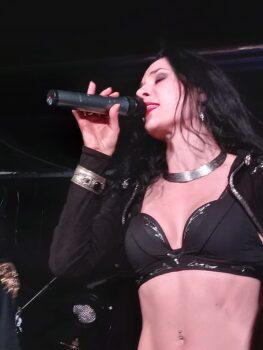 “Distant Shores” has a very haunting opening with the opening lyrics saying “Far away we have to go with no choice of returning” seeming to show the situation (although this was apparently written before the war, it now has taken on a much stronger sense of purpose) they are in. As Alexander remarked about things “that ship has sailed, and I am glad it is to here” which got a cheer.

A special mention to Ryan for his solo on this, he really nailed the melody line beautifully. Another song that had a similar vibe lyrically was “And I Shall Find My Home” from “The Legacy Of Atlantis” album which although not really about current events has lyrics that say “Visions of my home are haunting me” along with “what lies ahead, even I don’t know“. Alexander explains after the song his connections with Scotland (he studied here) and that he always felt he had 2 homes Scotland and Russia, but now he only has one. The sadness in his voice was noticeable. It is obvious he still loves his first home but wishes things were very different.

From Party Vibes To Respect

Before the wonderful “Legend Of The Free” as he explained the song, he remarked how there is a lack of possibly the most important in the world right now only to have an audience member shout “BEER” which raised a laugh. Even in the more serious moments the audiences here can get involved with wisecracks making the show unique. Of course, Alexander agreed that beer was very important but he was talking about freedom. 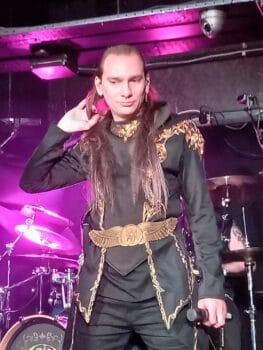 despite being quite a serious topic. A couple of songs have quite a Scottish or at least Celtic vibe about them, those being “Shackles Of Gold” and “The Way Is The Aim“, the first of those which incorporates pipes. With the crowd clapping swaying and shouting “Ois” at all the right moments both caused a bit of a party vibe to the night. On the former, the melody was reproduced nicely on the guitar solo. “Life Eternal” hit a different vibe as it was dedicated to all victims of wars and all 3 singers at one point stood central stage, still, heads bowed almost in mourning or at least taking a moment to pay respects which was very respectful.

The band has all the bombast one would expect from a symphonic metal band but they also know how to do subtlety and make an audience reflect on important things whilst making sure the crowd have a bloody good time. They played 17 songs (I saw 16) and I have picked some of what I consider highlights, I am sure others at the gig might say I have missed one or two in this review. The setup has the 3 singers in the middle with the bassist to the left and guitarist to the right and the drummer right at the back (Manuele Di Ascenzo does a sterling job throughout with a few tracks at points all wrapped around his performance).

They all (apart of course from the drummer) can move around but mostly it is the 3 that work the crowd with both ladies headbanging furiously at points. There are smiles throughout from the players and as a group they are wonderfully engaging folks who obviously love what they do and will move heaven and earth if possible to play and perform. Absolute respect from this reviewer.

A Quick Look At The Support

Support came from UK outfit Control The Storm who I missed some of due to interviewing (see below) but what I caught was good. The singer had a strong voice so much so that they threw in a very creditable version of Jim Steinman‘s “Holding Out For A Hero” made famous by Welsh songstress Bonnie Tyler. The 5-piece went down very well with the crowd from what I saw, with a few folks singing along with them on their own songs. They had folks clapping along when asked. I rather enjoyed the song “Chaotic Mind” which had a right good Maiden galloping riff coming in and out through it.

Just to add that I had the chance to chat with the band too (it was Alexander that answered my questions) and they were lovely company. That interview will be coming soon including a cracking put down from Alexander to Tim which had us all laughing. Look out for that soon here at CGCM.

You can still catch the bands in these towns… Newcastle, Manchester, Birmingham, London. Tickets HERE

Check out all our Upcoming Release announcements New release from: BARNABAS SKY – What Comes To Light (January 20, 2023) The melodic hard rock all-star project BARNABAS SKY, led by German guitarist and songwriter Markus Pfeffer (LAZARUS DREAM/WINTERLAND), launches its sophomore album What Comes To Light! Stylistically, the project of the multi-instrumentalist from Kaiserslautern combines groovy […]