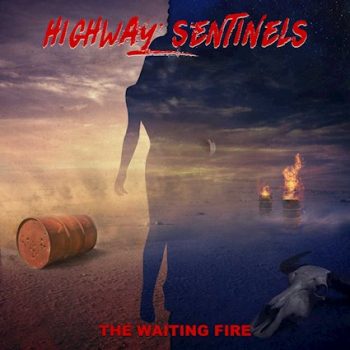 Highway Sentinels is a project created by Steven Rosen and Jimmy Waldo.
Steven, himself a legendary author, journalist and guitar enthusiast going back to the 1970s, be it traveling on a plane with Led Zeppelin or as a close friend of Eddie Van Halen, he has always been at the forefront of rock journalism and its surrounding culture.

Jimmy Waldo, founding member of Alcatrazz and New England, as well as having performed and recorded with the likes of Quiet Riot, Vinnie Vincent, Blackthorne, Pretty Maids, WASP, Skull, The Scream and many more, Jimmy has an astounding resume and a catalog of recorded music few can rival.

During the lockdowns of 2021 the two men set about recording a batch of songs that they had been working on for a number of years, some dating back even decades were brought into the mix.
The right vocalist had to be found as the guys wanted one consistent singer throughout to tie it all together, too many records these days are made up of singer 1 plus singer 2, 3, and 4…
And while there are a number of highly skilled guest guitarists on this record, the guys felt it important to also present this as a band-union so it not come across as yet another “chuck all these guys together and see what happens” type of project.
Each guest soloist was chosen for the song, rather than “name-value” alone.

David Reece was this vocalist, his work with Accept, Bangalore Choir, Bonfire and as a solo artist speaks for itself… he was given complete freedom to write lyrics and vocal melodies.
A couple of songs come from the past, “Afterlife” and “We Won’t Be Forgotten” come from Jimmy’s past with Blackthorne, and “Victim Of The Night” a song David had recorded with Bangalore Choir which never found it’s way onto the classic debut of that band.

Mark Zonder on drums brings an enormous pedigree to the record. Known worldwide as the longtime drummer of Fates Warning and Warlord. As well as the newly launched A-Z band with Fates Warning vocalist Ray Alder it all made sense to have Mark Zonder be the featured drummer on this record.

On bass we have Donnie Van Stavern, from the much-loved metal legends Riot. Donnie’s involvement means that no one has to worry about the bottom end falling out of a song, or having to have the guitarist re-cut the bass parts in a backroom somewhere… Donnie only plays one way… and that is to go for the throat full-on metal!

Altogether this is a Highway Sentinels record rooted very much in the traditions of classic rock. The album is titled The Waiting Fire….. but now you will wait no longer.