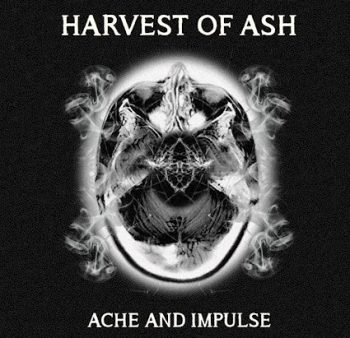 HARVEST OF ASH – Ache And Impulse

I Wanna Tell You A Story:

If I may go off on a slight tangent before I start, I want to tell readers how when I was young (far too many years ago) I had a tape of the Genesis album The Lamb Lies Down On Broadway given to me. I played the shit out of it. I couldn’t work out what it was all about though. A friend of my older brother told me that the album had a story on the inner sleeves. I saved up and went into town to buy the album. Opening the gatefold up on the bus home, I was eager to read the story to get to understand this impenetrable album. I must have read it 100 times after that and I still was none the bloody wiser. Has it spoilt the enjoyment of the album? Hell no! I play it to this day regularly.

Now you may be wondering what this has got to do with this band Harvest Of Ash? I received a link to this album. I rather liked what I heard. It is heavy and has a growly vocalist. With seeing that it had a conceptual feel I contacted the PR guy who kindly asked the band if I could get the lyrics so I could understand it all. They were more than happy it seemed to help. I opened the link and devoured the words. Strangely I still didn’t bloody understand it😂. Does that spoil my enjoyment of the album? I think you who are reading this can probably guess. OK, so what about the band and album?

Some Background To Band And Album:

Harvest Of Ash are a three-piece outfit who are based in Salt Lake City in Utah. It seems the guys had been in various bands on the two coasts (East and West) and found each other for the first time whilst staying in Utah. The band are comprised of Graham Reynolds on bass, Mike DiTuilio on drums and finally Pepper Glass on guitars and vocals. The idea behind the album is the four stages of a migraine but not about headaches themselves (if I get any of it).

The press notes say this… “We become ensnared in the morals of broken people (prodrome and aura). These narrow standards stifle our instincts and gifts (headache). Yet, we can emerge from this mental fog and embrace who we truly are (postdrome).”   The album comprises of five songs with two of them being just over the 10-minute mark. The album called Ache And Impulse is their debut work and is a hell of an introduction. The press blurb mentioned various styles including doom, post-metal, sludge and hardcore but I would add psychedelic and progressive rock/metal to the melting pot of sound too.

It’s All About The Bass (sometimes):

Opener “Harvest Of Ash” sets the scene with its discordant start, feedback followed by a nasty heavy riff, doomy and slow. When the vocals come in they are low growls which match the music. It is heavy on the bass lines and riffs (from Graham) with the drummer (Mike) doing fills here there and everywhere and the guitarist (Pepper) sort of creating ambience, on this it starts as screeching and wailing until it merges with the bass, all sludge and dirty sounding. The song revolves around a couple of riffs that the band can stray from individually at any time. After one song personally I was hooked. I think it was the bass sound especially. Love hearing the bass especially when it is dirty or fuzzy and roaring out of the speakers.

“I Prodrome” has elements of both psychedelia and acid rock at the beginning. Slow guitar strumming with periods of quiet until the riff comes in. Despite it being sludgy it also grooves so that feet and head can move. There is a definite 60s influence in this especially when the track drops down where the drums are more the focal point, the centre of it all as the other two instruments circle around them, which kind of makes this very jazz orientated. 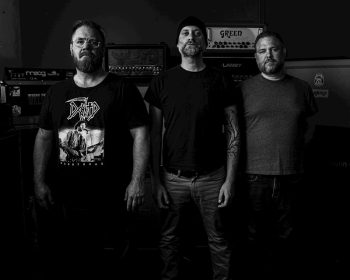 “II Aura” (which of course means a distinctive atmosphere) has a (ahem) distinctive atmosphere! The bass line is slow, darkly ominous, and did I mention slow? Vocally the words are growled so that each word is like a sentence. At times it is akin to the/a death march, or at least the first three minutes are. It is a metal album so things do speed up as instruments fully kick in but it never leaves that feeling of despair. The guitar playing in the latter part sounds like some form of distress signals (it sounds superb) with the bass and drums doing all sorts of fills and things. In listening to the album it at times feels like a bass and drum album with the guitar being used as colour, creating extra atmosphere and mood. Very effective.

“III Headache” keeps it moody with discordant guitaring at the beginning. It builds into a quite interesting groove, which isn’t easy always to do when playing doomy sludge style music. Finding an earworm is an extra delight and helps to maintain pull on the listener. About three-quarters of the way through it goes very psychedelic with wind effects and drums before having a melody on the bass come in that had a classical vibe (it did remind me of something that I can’t quite put my finger on). At each turn, the heavy riff comes in for a bit then departs. It is kind of a central ground whence everything else moves around.

Closing track “IV Postdrone” has an aura of its own. The first three minutes feature gentle guitar playing and vocals that are a tad cleaner sounding and the whole thing sounds like it was recorded in a church due to the echo going on. It is like going through a religious experience if you know what I mean. Although it heavies up the song definitely feels more reflective, you are dealing with the effects of what came before. For me, I felt like I was coming out of a trance (a very heavy sludgy one) into light, which if that is what they hoped for they accomplished it with this reviewer/listener.

I was hooked before the end of track one! I was very pleased to find out that the whole album maintained that early opening high standard. It is heavy, plenty of doom and sludge elements but also manages to show terrific subtlety in places, using jazz and psychedelic influences to create the moods. The bass is right up the front a lot of the time and sounds as dirty as anything I have heard (including Tim Bogart who when I saw him with Cactus made everyone I heard before sound lovely 😀). The drums are given lots of space which again lets the drummer show his talent and the guitar and vocals add all the little extra shades or colours.

The 40-minute running length is perfect for the album, it never becomes bogged down. It hits hard and gets the job done. I still don’t understand it fully but hell when has that stopped me from loving an album? It hasn’t before and it doesn’t now. Highly recommended!