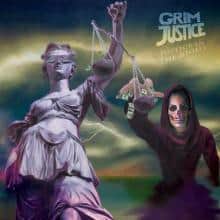 GRIM JUSTICE – Justice in the Night

The band was founded by lead-singer Michela Vignoli and lead-guitarist Thomas Strohmayer at the end of the year 2010. Grim Justice published their first self-titled studio album in March 2015. After their successful first Europe tour and with new songs in their backpack, the band released the second album The Return of the Flame in May 2018. End of 2022 Grim Justice are back with a new single and video clip as well as their third album release Justice in the Night. At first for Stream and Download via bandcamp, end of February 2023 the album will be available as CD also.

Grim Justice rock hard and heavy since 2010. Inspired by the good old 80’s Heavy Metal and 70’s Hard Rock legends Grim Justice‘s songs tell about the unmerciful justice that everyone gets to know at least once in a lifetime. The talented musicians based in Vienna, Austria add a clear individual note to classic and dark New Wave of Traditional Heavy Metal elements. They stand out through the strong vocals by frontwoman Michela who delivers heavy and soulful vibes reminding of Doro and Crystal Viper‘s Marta Gabriel. Get stunned by their strongly infectious tracks and guitar riffs.

Grim Justice proudly present the official music video for their Single Release “Curse of the Moon”, taken from their upcoming third self-published studio album “Justice in the Night”, which will be released exclusively in digital format on November 25th. Many thanks to Fabian Wollner and Ahmed Al-Jaderi for making the video happen.