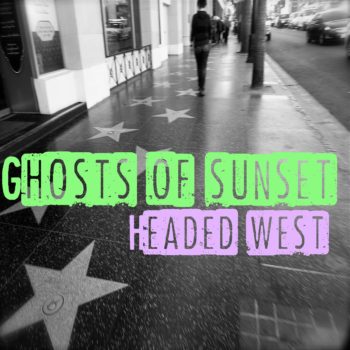 Ghosts Of Sunset is the brainchild of two singer/songwriters and musicians called John Merchant and Todd Long. Headed West is a kind of a love story to the days of the 1980s glam or hair metal scene. The music is definitely in keeping with that era and the lyrics tell the story of a fictional band heading west hoping for the big time. According to the press release they are joined in the making of the EP by (ex?)members of bands such as LA Guns, RATT, Enuff Z’Nuff and Lita Ford. These include Tracii Guns and Ryan Roxie and anyone who hankers for those days will definitely understand what the songs are about.

A Look At The Songs And Story

The opening and title song “Headed West” is the heaviest rocker here. I did find myself at the very beginning of the song thinking of The Sweet the UK band from the 70s due to the drum intro being very similar to “The Ballroom Blitz” before it turns more 1980s.

The song has a great groove, it is good old fashioned rock n roll but slightly teased in the hair department. There is plenty of attitude with that snotty-nosed almost chant-like chorus as the song progresses. Lyrically it captures that youthful naivety as they think of heading from their Mid Western town to where it is all happening in LA.

The band have plenty self-belief as they sing “We’re like nothing you have ever seen” and as they have played “every club till we got too big” locally they are full of confidence. 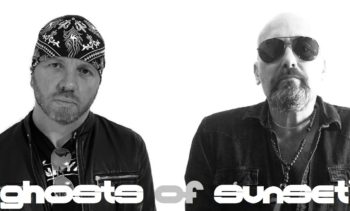 The Men Behind The Music: Ghosts Of Slumber

“Another Rock N Roll Show” has as one would expect a big old chorus with the words “rock n roll” in it. However, the lyrics quickly show up some disappointments as they play at “nine o clock to a half filled room“. Even then folks are too busy talking or posing frustrating the band who expected instant success. It is quite an upbeat glammy song despite the lyrics having that undercurrent of disillusionment.

The next couple of tracks are a bit more ballady (is that even a word? If not I guess most folks can work out what I mean). Lighters in the air songs. They are as cheesy as fuck, but that was the 1980s. If you didn’t already like the era you would probably already have stopped reading! It is played to perfection especially the lines “miles in-between can’t shake our love” in the song sensibly entitled “Miles In-Between“. A real “ah” moment.

“Never Goodbye” has the marvelous line at the chorus “just say goodnight, never goodbye“. Even though things might not seem to have worked out they are not giving up or going away. Another kid on the block has taken over now (I assess they mean grunge on the timeline) and they are bloodied but unbowed.

“Try It For Love” finishes the EP. It is bullish and played at the start on acoustic guitar and reminded me heavily of a 70s rather than 80s outfit in Mott The Hoople. The band are now a little older and looking back, working out what went wrong. They take on some responsibility when they sing “we tried to be funny, we tried to be cool, now push comes to shove can we try it for love?”

The idea of fame is gone and all that remains is music itself and doing what you love for that love. I am sure there are plenty of folks in bands who can relate to that. The EP isn’t as rocky as I expected from the first song (which is a belter) but the execution of the story and the vibe and feel of the music are spot on. Even the style of vocals throughout should delight any fan of 1980s hair metal.

The story can also ring true for bands that are not in the scene the piece is about. How many folks travel to somewhere expecting success only to have their idealistic dreams crushed? How many artists come to the realization that all they want to do is play and entertain? OK, they might never become huge but they are still alive and able to tell their story. Even though I was never a big hair metal fan I found this a very enjoyable listen and I can say that those who were or are will love this.

The 1980s glam scene will not die, whilst folks want to perform that style and folks want to listen to it. This is an EP that grabbed me right away and didn’t let me go. It is an excellent listen. If you are a glam/hair metal fan check it out.

As of this moment, I have no link for physical copies to buy so please check the band website or Facebook page as you may need to order. The EP will be available on Spotify and there is a link to pre-order from the latter!

Check out my other articles and reviews here