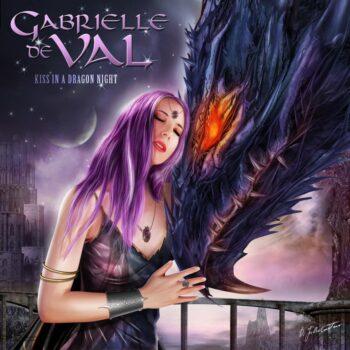 Escape Music is delighted to announce the release date for the debut album by the much-loved female artist Gabrielle de Val, titled Kiss In A Dragon Night!

Gabrielle de Val started to get involved in the Rock scene when in 1987 she created the band Yin-Yang, which would later be called D’Val, together with several musicians who suggested to her to take part in the ‘Villa de Madrid’ contest, the most relevant of the Spanish music scene for decades. To the band’s surprise, they ranked second in the final, achieving great media coverage, as well as financial aid that they invested in upgrading their equipment and the recording of a vinyl single, which would be distributed nationally.
Gabrielle composed, wrote lyrics, sang, did interviews… and that’s how she turned music into her life. The band recorded several demos that today are part of the treasure trove for the nostalgic Spanish Rock-lovers. After that, the band remained inactive… for almost 20 years! Until in 2010 Alfonso Samos, David Erick, Alex Morell and Gabrielle reappeared, to everyone’s surprise, under the name of The Val and recorded, at last, their debut album Back. And as Gabrielle says, “Good things sometimes come to those who wait… a long wait!”

But the world had changed and borders had disappeared for music thanks to social networks and the countless possibilities they offered to go one step further; and that’s how an album that had been conceived to close a stage of the past became the key to open a new and fascinating future. The album was widely distributed and supported by important media such as Classic Rock Magazine and Fireworks Magazine, which made possible the recording of a second album, Heading for the Surface (2015) and a third one, King Ocelot (2020), all of them with extraordinary reviews from the specialized media.
With The Val, Gabrielle gave major concerts, participated in festivals, toured England and had the opportunity to sing live alongside big names in international Rock such as David Saylor and Robert Tepper (Rockingham Fest, 2015) as well as with Spanish artists, such as Rafa Martín, José Carlos Molina and Miguel Oñate.

Kiss in a Dragon Night, Gabrielle‘s first solo album, was conceived when Bruce Mee, editor of Fireworks Magazine, received the album Back to write a review for the mag. Somehow the song, over time, led him to want to record a full album with this title, and together with producer Khalil Turk (Escape Music), he shaped the idea and created an album involving vocalists such as Steve Overland (FM/Lonerider/solo), Mick Devine (The Roads/Seven), Robin McAuley (Black Swan/Michael Schenker Band), Mark Boals (Yngwie Malmsteen) and Terry Brock (Strangeways) as well as musicians such as Gary Pihl (Boston/Sammy Hagar), Eric Ragno (Joe Lynn Turner/Babys), Johan Kullberg (HammerFall) and Fredrik Folkare (Nordic Union/Unleashed). Shortly before starting to work on this album and also under the guidance of Bruce Mee and Khalil Turk, Gabrielle appeared on the Circle of Friends album The Garden (Escape Music) with the solo track “When He’s Gone“.

For Gabrielle, Kiss in a Dragon Night is a mind-blowing adventure, with fellow artists who have “given me more than I could have ever imagined and with songs that I have put all my soul and dedication into.” Already with the suggestive cover of the album, by Gaetano di Falco, a surprising journey begins, with songs by The Val transformed into duets, very powerful original songs by other writers, as well as versions of fascinating tracks such as “Stayin’ Alive” (Magnum), and “Moonlight Shadow” (Mike Oldfield), the latter of which she had been wanting to record since she heard it for the first time years ago. All of Gabrielle‘s vocals have been recorded in Stockholm, at Fredrik Folkare‘s studio, who has done a great job recording the guitars and bass, and also mixing all the tracks on the album. In Gabrielle‘s words, “Working with Fredrik has been awesome and I can’t think of a better place in the world than Stockholm to start a journey like this.”