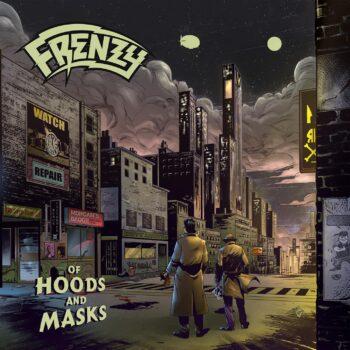 FRENZY – Of Hoods and Masks

Spanish Heavy Metal band FRENZY has just signed a contract with Fighter Records for the release of their 2nd full album entitled Of Hoods and Masks which will be released on April 20th, 2023 on 12″LP, CD and Digital formats. The Japanese import version will be available through Bickee Music.

About the deal with Bickee Music: “It’s a pleasure to finally have a great partner in Japan for Frenzy, we really hope that this will help us to get there and share our shred with our Japanese fans”

Of Hoods and Masks, the second full-length by the Heavy Metal and Comic Book fanatics band will contain 9 tracks, including a conceptual story in 7 songs inspired by the Watchmen graphic novel.

1. One Minute Closer to…
2. The Doomsday
3. Where is the Joke
4. Spectre of Love
5. Uncompromised
6. Betrayal in Cold Blood
7. Fear the Hood
8. Living in Oz (versión de Rick Springfield)
9. Give Me Shred (Or Give Me Death)

The album was recorded & produced by Angel Muñoz at Traste Cero studios during 2020 and put on hold for 2021 because of the traffic accident suffered by guitar player, Luis Pinedo, who is now ready to come back to his shredding duties and tour supporting this fantastic album. Of Hoods and Masks is also the final run of Alejandro Gabasa Barcoj (Leather Heart) in FRENZY, who had to leave the band after a great job recording the album, being replaced by Billy Banzai.

Release date for FRENZY – Of Hoods and Masks will be 20th of April 2023 through Fighter Records on 12″LP, CD & Digital formats. In the meantime, check out FRENZY‘s official Facebook below. (text taken from Frenzy’s Facebook page).