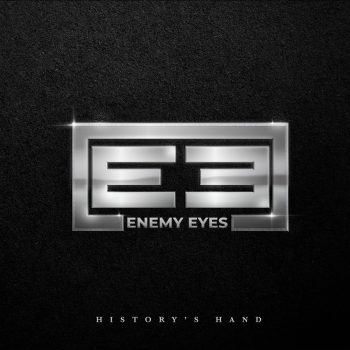 Johnny Gioeli, a career vocalist whose credits include Hardline, Axel Rudi Pell, and Crush 40, has announced the formation of a new band, Enemy Eyes.

The band’s debut album, History’s Hand will be released on November 18, 2022.

New single & video, “Peace And The Glory” is out now. Watch the lyric video below.

Enemy Eyes is a fulfillment of a vision of Johnny‘s to create a new band that combines his fondness for classic hard rock and European metal.

Of note, this will be Gioeli‘s 100th official release as a recording artist after decades of multi-platinum, gold, and critically acclaimed albums. A true landmark recording in his discography and also the beginning of a new chapter.

“Enemy Eyes is the final product of a vision I’ve had for many years of combining old school rock with a European metal feel. At the end of the day, I can sing many styles of music, but my heart and soul is metal. It is known to my fans as I wring the sweat out of my shirt each night on stage. I want to feel what I sing. I grew up with the music of Dio, Rainbow, [Black] Sabbath, [Iron] Maiden, and more and I needed to fulfill what I feel is a missing piece in my musical puzzle, so Enemy Eyes has been born. It’s not just a project, it’s my music life’s work moving forward,” says Gioeli.

Needless to say, Johnny brings Enemy Eyes to life with a wealth of experience and a clear-eyed vision of where he is going with the band.

“This is completely different from Hardline, ARP, and Crush 40. Completely different. It is a definitive new music entrée on the menu of my career and one I’ve been hungering for,” says Gioeli. “The influences are many. From the metal music I grew up with to more modern bands like Breaking Benjamin, Volbeat, Architects, and on and on. This combined with my love for melodic and Euro metal, to me, helps Enemy Eyes become a fresh world of metal,” he adds.

As he has done with his other acts, Gioeli plans to bring Enemy Eyes to the stage to bring the message and power of the music directly to fans. A seasoned musician who is now in his fourth decade of touring the globe, he doesn’t know any other way.
Stay tuned for announcements about tour dates and more info on Enemy Eyes by following the band’s social media as well as Gioeli‘s.