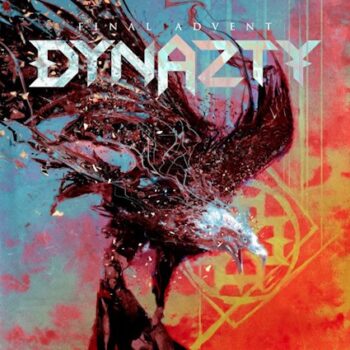 Dynazty are a band who I misjudged due to their name. I think the “Z” in the name made me think they were sleaze rock, a genre that I personally am not a fan of. From reading it sounds like they might have started that way but what they are now bears no resemblance to that.

I decided to check out the new single “The White” and was blown away by the strength of melody, the riffage, the orchestration and the vocals of Nils Molin who I later found out is one of the singers in Amaranthe the Swedish metal band. The song itself was theatrical in style and had not only guitar solos both electric and acoustic but a bass one. By the time I heard or should I say actually LISTENED to this song I wanted to check out the new album Final Advent out on AFM Records on Friday 26 August.

To give a little background to those who know even less than I did before the last few days (if that is possible), the band are from Sweden and are a 5 piece with the aforementioned Nils on vocals, but also featuring 2 guitarists in Love Magnusson and Mikael Laver along with bassist Jonathon Olsson and drummer Georg Harnsten Egg. They also have it seems an invisible and unnamed keyboard player who is all over the album! They formed back in 2007 with guitarist Love being an original founder. They went through a few singers until they found Nils via My Space (anyone remember that?) and have released 7 albums since 2009. This lineup was first heard back on 2014’s album Renatus and it seems to have been constant since. This will be album number 5 of this lineup.

Let’s Look At The Songs:

Opener “Power Of Will” kicks in with keys and a very sweet riff and goes into a huge-sounding chorus. One of the things I noted was that at times there are hints of Magnum (there are a few moments that they came to mind) and on a few lyric lines I could hear a touch of classic Bob Catley (that is a compliment as Bob is one of my all-time favourite singers). The guitar solo when it comes is very power metal meets neo-classical.  The soloing continues under the vocals at points to near the end of the song. “Yours” is a power ballad (yes this early on the album) but it is a massive Avantasia-style one. The verses are more restrained with the chorus raising the whole thing up for a lighters in the air waving back and forth moment. This is no wimpy ballad it has some balls. It helps when the singer is this good as he puts both emotion and power aplenty into the whole thing. 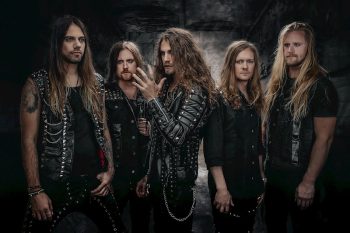 Speaking of Avantasia, “Advent” could fit onto one of their albums and shine. It has a great riff with vocal lines delivered fast and with urgency. These guys know how to write and perform anthemic songs with theatre and drama whilst kicking a fair bit of bum! It is one of several foot stompers on the album. This is arena rock at its finest. “Natural Born Killer” is one of 3 songs that made me note the name Nightwish possibly due to the keys although Dynazty put in an AOR singalong chorus. I believe most of the band does backing vocals but there are times I think Nils is multi-tracked as lines overlap at points and it sounds like it is his vocals throughout those moments. The guitar soloing is widdly but never overbearing. Short and precise allowing the song to be the focal point every time. The opening of “All The Devils Are Here” also has a Nightwish vibe, especially around the chorus. The drop-down is classic rock/AOR so completely different to the aforementioned band. I think that during the chorus it is probably physically impossible not to move your feet. It has that kind of thumping beat that grabs you.

After “The White” which I mentioned earlier comes “Instinct” which has a chugging riff, sounding almost industrial (not quite Rammstein though) before going all power metal. It floats between the 2 styles until the chorus which is classical in style, in fact, the guitar solo had me thinking of “Ode To Joy” (Beethoven‘s ninth). It really is a strange but effective mix of styles and even manages to mention “beastiality” at one point!  Great chorus though. “Heart Of Darkness” reminded me of “Imaginarium” by you know who around the chorus! Again it is something that floats in and out, the rest of the song sounds nothing like them.

A Bit Of Eastern Promise:

“Achilles Heel” has an Eastern vibe and manages to half-inch a tiny section from Metallica‘s “Sad But True“… well that is what it sounds like! For the most part, I would say it is a mix of Avantasia and Magnum with a bit of Orphaned Land or Myrath mixed in. It has a classical vibe, more than symphonic if that makes sense. It is all very dramatic and dynamic. Nils hits some nice high notes over the guitar work nearer the end. The end itself with spoken word adding to the drama! The album closer “Power Of Now” is a fast-paced rocker, the pace not dropping even when it drops down. Another foot stomper with widdly almost neo-classical guitar solos and a massive chorus. I could imagine health freaks could use this for a workout in a gym (the idea of me in a gym is laughable so imagination is needed!) as it is that energetic and quite 80s sounding.

As I said at the start, don’t judge a book by the spelling! This is quality and classy hard rock meets power metal with symphonic/neo-classical elements played beautifully with some first-class vocals. Anyone who enjoys the music from bands I have mentioned as possible influences especially Nightwish, Avantasia and Magnum should find themselves digging it tremendously. I certainly loved it. My feet were moving and my head nodding through much of it. Plenty of melody whilst rocking hard. Highly recommended.