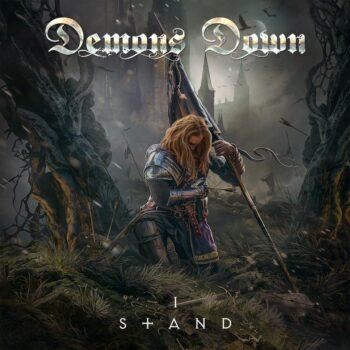 DEMONS DOWN – I Stand

A new single and video for the title track is out now. Watch the music video below.

Demons Down traffic in a hard rock sound that references the late ’80s/early ’90s movement where massive hooks, huge melodies, and lush keyboards were the order of the day. But this is no simple exercise in paying tribute to yesteryear as the music rocks hard to compliment the vocal talents of Robledo (who has, sonically, been compared to the likes of Jorn Lande and Russell Allen). Fans of early House Of Lords material and their sonic peers from that time period as well as Robledo‘s debut solo album, Wanted Man, will have much to enjoy here.

James Robledo is a Chilean vocalist who comes from a family of musicians with prominent places in the history of Chilean music, with both national and international success. In his youth, he began his foray into metal and rock, but in 2016, James took part in the popular TV show THE VOICE CHILE 2, where his participation generated a stir thanks to his outstanding vocal performances. Since then, he has become a more active member of the larger hard rock/metal community and, with Frontiers, he has released one solo album, Wanted Man and an album, The Mirror Star with Chilean metal band Sinner’s Blood, who are also currently preparing their second album for release.

Francesco Savino is an Italian guitarist and songwriter who founded the up-and-coming gothic metal band False Memories in 2015. That band’s latest release, The Last Night Of Fall (2021), was met with praise from both fans and metal media alike. The band also released a covers EP, Echoes Of A Reflection and a live EP, Live Until The Twilight since the release of their last studio album. With his songwriting partner Rossella Moscatello (who is the lead vocalist for False Memories), Franceso has also been contributing songs to Frontiers and is working on the next False Memories album.

Jimi Bell is an established hard rock guitarist who is currently a member of both House Of Lords and Autograph, and, of course, Demons Down. Bell, a Connecticut native, was inducted into the New England Music Hall in 2020. In addition to his work with various bands over the years, he has done a wealth of studio work for sports outlets like ESPN, WWE, Impact Wrestling, and NASCAR. Bell is an official endorser of Roberts Guitar, Viper Guitars, Charvel Guitars, PVX Guitar, Funk Guitars, Ovation Guitars, GHS Strings, Rocktron, Randall, Marshall Amps (Europe), and KickAss Cables. He is also the inventor of the SHREDNECK.

Chuck Wright is best known as a long-time member of multi-platinum rockers Quiet Riot playing bass and singing on Metal Health which was the first “metal” album to go to #1 on the Billboard charts, selling over 10 million copies. Wright was also a founding member of House Of Lords and Giuffria and has worked alongside such rock music luminaries as Alice Cooper, Ted Nugent, Pat Travers, and members of Guns ‘N Roses and Kiss, just to name a few.

Drummer Ken Mary’s lengthy career in music has seen him play in a wide variety of genres that showcased his wide-ranging skills at the instrument. In addition to being a drummer, Ken is also an engineer, writer, vocalist, and award-winning producer. He has sold a combined 5 million (plus) albums globally over the entirety of his body of work. His drumming can be heard on albums from Alice Cooper, Jordan Rudess, Northern Light Orchestra, Kip Winger, House of Lords, The Beach Boys, Impelliterri, Don Dokken, Fifth Angel, Bonfire, and many more, and of course, very soon, Demons Down.

5. Where Will Our Tears Fall?

7. Stranded In The Middle Of Nowhere

9. To The Edge Of The World

10. Search Over The Horizon