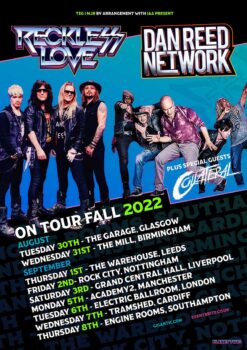 The previously announced co-headline tour of Dan Reed Network and Reckless Love has been put back to autumn so instead of a February tour they will be hitting the UK August and September with added guest Collateral.  This excellent 3 band bill will be hitting the cities of Glasgow, Birmingham, Leeds, Nottingham, Liverpool, Manchester, London, Cardiff and Southampton, dates and ticket details will be further down this news piece! “The ongoing instability caused by the pandemic has made it impossible for Dan Reed Network and Reckless Love to travel to the UK and throughout Europe,” says Dan.

Dan adds, “This decision has not been made lightly. We were determined to give these shows as much of a chance of happening as possible, however, it is now clear that the world is not yet in a secure enough position for us to be confident about traversing countries with shows unaffected by Covid. There is the added caveat that when we return to play our first shows in what now will be well over two years, we want to do this in true DRN fashion and that means freely interacting with those who want to come and hang out with the band post shows. Our live performances are fuelled by our interactions with you all, before, during and after our shows.”

In DRN news, their album Let’s Hear It For The King which was due out next month now has a release date of Friday, June 17. The album can be pre-ordered from this LINK.  This is their sixth studio album (their first since 2018’s Origins) and features 13 songs (on the CD version, 12 on vinyl) that have infectious melodies, provocative lyrics and honours their shredding funk-rock roots. Dan says he believes this is the “heaviest, funkiest and most melodic DRN album to date.” To coincide with the new album release date the band are pleased to announce that they will be performing at the HRH AOR Festival in Manchester (England) in June as well as hosting an album launch party in Hamburg (Germany) in conjunction with their record label Drakkar Entertainment.

The new single “Pretty Karma” is available to stream now and the video can be found at the bottom of this news item.

*Bonus track on CD (not available on vinyl edition) 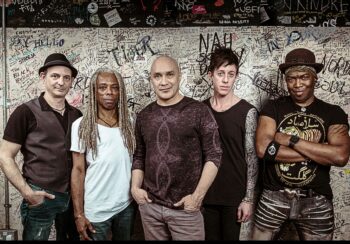