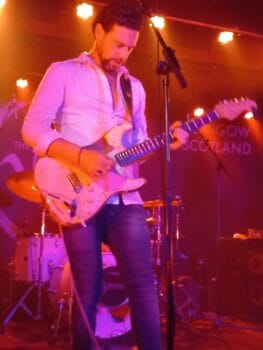 Dan Patlansky, the South African-born blues guitarist arrived in Glasgow as part of his tour supporting his excellent new album Shelter Of Bones (Review to be found HERE). Dan was voted at number 4 best guitar player in the world by Total Guitar magazine and I believe is the only person to have 2 albums consecutively voted best of the year by Blues Rock.

He was invited to play as support by Bruce Springsteen for the Boss‘s show in Johannesburg where he played to around 64,000 people. He has also supported Scotland’s very own King King as well as guitar virtuoso Joe Satriani.  The man has some pedigree so seeing him live downstairs of an old converted church in Glasgow was a treat for fans here in Scotland.

The band came on stage and went straight into a musical piece called “Lift Off” and they certainly did. This was a powerhouse display of rocking blues with plenty of skill on display. The rhythm section was wondrously tight, holding things down (all night) whilst adding their own little runs and fills showing their improvisational skills.

Like many artists, Dan has been desperate to get back on stage and play to a live audience and he spoke about that. “2 and a half years I have been wanting to get back and play the UK, I get here and end up with the worst fucking cold I have ever had” he told us. His voice might have been affected a little but his passion shone through like a beacon. In fact it was almost like he was determined, or MORE determined than ever to shred with his guitar to make up for having a bad cold.

The soloing on the night was quite simply at times off the scale. He took time after a rollicking and angry “Snake Oil City” to speak about the background of the song and how at the moment we seem to have the worst ever selection of politicians worldwide. He did go on to say that the blessing in that is as a blues writer there is a “bottomless well of inspiration” to get ideas from.

“Lost” took things down quite a bit. The song which he explained was written about the period that his wife was waiting for a diagnosis for an illness which they had been told could have been something extremely serious which thankfully turned out to be not so bad long term is very moving indeed. Live he looked to be really emotional as he sang “baby I’m lost when you’re not here, even the thought you’d disappear, watching you sleep… holding you tight, holding you dear“. The solo was gentle, reflective and emotional.

After such an impassioned piece he turned it right around with a song from his 2016 Introvertigo album which was an upbeat funky track called “Stop The Messin‘”. It worked nicely with this switching of moods. The ending caused smiles amongst the band. Now I didn’t notice a mistake but they all looked at each other like they were going “ok who did that?”.

It was fun to see the interaction and the band enjoying themselves, it tends to be contagious.  “Bad Soul” was an absolute foot stomper with a huge groove and rythmically cool and easy to singalong with chorus. Heads were nodding and I am sure feet were tapping. It is a song that would sound great on radio as it has commerciality or accessibility to it that would I feel go down well with folks who maybe haven’t yet heard him. 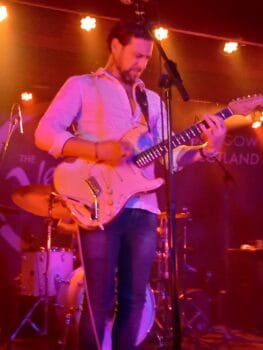 Dan then took the time to tell us about the song “Heart Of Stone” which he apparently wrote when he was around 13 or 14. He said that at the time he thought he had made something “groundbreaking” only to be told by his elders it wasn’t. He was laughing away as he told the story.

Dan then remarked that he had decided to play it as he had never played it in the UK before (he checks his setlists to see what he can play differently when he visits places he has been before to keep it varied and interesting for the audience, and of course himself) and it kind of takes him back to “simpler times“. By God it sounded good. It was a bit longer than the studio version as he played several styles in his solo and at one point he was going for it big time. This was one of those moments just to stand back and admire one of the “best guitarists” in the world at work.

He also went back in time to 2009 when he played something from his Move My Soul album. This was another where he spoke a little about the background and even told a story of someone contacting him by email asking if they could cover it and make a video for YouTube to which he said yes. He kind of forgot about it, and then when he checked the video he found that it had so many damned hits. He remarked “this guy makes better videos than I do” whilst laughing away.

This was another lengthy workout that kept the crowd enthralled. He has this circular motion technique that he uses at times with his “strumming” hand which gets some really interesting sounds out of his guitar. His versatility again was on show as he switched style and moods throughout whilst the band held everything down perfectly.

He continued to move around the albums, this time Dear Silence Thieves when he played “Backbite” a heavy funky rocker where he allowed both fellow musicians to solo. Both of them played short but excellent solos that were both groovy yet filled with musicality, there was feel in them, it wasn’t just showy but were almost little musical piece in themselves.

Even the guys onstage were smiling whilst watching each other and getting off on those grooves. To finish the main set he did a tribute to the late great Stevie Ray Vaughan. Unleashing both “Scuttle Buttin’” and “Say What” in an excellent salute to the great guitarist.  There was no doubt about his love and admiration for SRV and he did a great job of both. After a short break, he came back and they played “I’ll Keep Trying” from the new album for an encore. A quieter more reflective piece that brought the evening to an end. 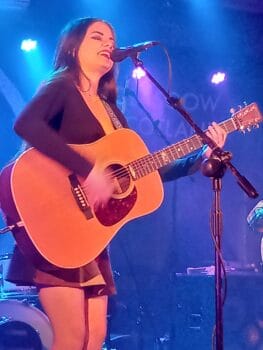 Arielle: Support On The Night

Support came from New Jersey-born, California/Hawaii-raised singer-guitarist Arielle. She was backed by a bassist (Devin North) who sat on a box that also supplied light percussion.  Arielle has some pedigree having been “discovered” (whatever that fully means) by guitarist Nuno Bettencourt ex of rock band Extreme and who was picked personally by Queen‘s Brian May for a role in the stage musical of We Will Rock You. Recently she released an album with the wonderful title of Analog Girl In A Digital World. In watching her in action I could have imagined her playing an event like Woodstock, hippy vibe and attitude. She alternated her set between electric and acoustic guitar numbers. She has a quirkiness about her that is captivating.

Opening with the song “Voices In My Head” which has some interesting lyrics about self-doubt, the voices saying things like “that I don’t really matter… I aint that pretty” but she describes them before the end as a “backseat driver in this loaded up Sudan“.

She finishes by telling the voices they can “kiss my” without finishing the line, instead a cheeky smile on her face. Of course, being in Glasgow she altered her song “I’d Rather Be In England” to name Scotland. The 2 of them even threw in a bit of the song “Scotland The Brave” for extra browny points! Her attempts at a Scottish accent weren’t too shabby either.

“Weakness For You” had her getting a member of the audience called Alex to play the triangle from the floor. This young lady knows how to engage her audience and create a good vibe in a room. “73” is about the love of her life, her “man” who turns out to be an old camper van/bus. It was an upbeat number which is a taste of her next album. Being Glasgow someone in the crowd asked “where’s Brian?” so she told the story of building her guitar like Brian May of Queen. Arielle did a fine job in getting the crowd warmed up with some infectious tracks and a lovely bonhomie-type vibe. A very engaging and entertaining performer who has a big future ahead of her.

A fine evening of blues-based music from 2 acts who certainly entertained the crowd not only musically but with stories and laughs. The tour continues (see below) so if it comes close then folks should get themselves along as they put on a good show and make a great night out.

There is a new festival on the East Coast, one that really had an eclectic lineup, and I did not want to miss it.  Fortunately, I was released from the hospital on the afternoon of the 10th and proceeded to find out how to get to Atlantic City.  Unfortunately, that didn’t happen until the next […]

Ok I admit it, I wasn’t a die-hard 10CC fan, but for anyone growing up in the ’70s you didn’t have to be. They were responsible for a good portion of the soundtrack of some of the most important years of one’s young life. When I first decided to go to Sweden Rock after years […]