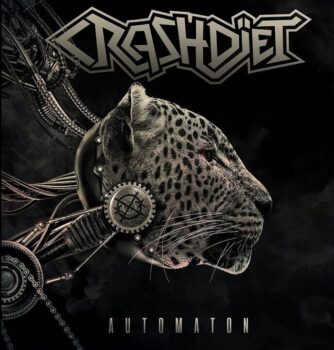 Just like a gigantic robotic machine with pre-determined instructions, failure was never an option… No matter what obstacles may have come their way in the past, tragic deaths, sudden line-up changes etc. Crashdïet have always marched forward, delivering their own style of sleaze metal they have become so well known for. Their sixth studio album contains 11 powerful sing-along anthems with massive drums, guitars, bass, powering vocals including a surprise special guest and a haunting voice from the past.

An automaton (/ɔːˈtɒmətən/; plural: automata or automatons) is a relatively self-operating machine, or control mechanism designed to automatically follow a sequence of operations, or respond to predetermined instructions.[1] Some automata, such as bell strikers in mechanical clocks, are designed to give the illusion to the casual observer that they are operating under their own power. Since long ago, the term is commonly associated with automated puppets that resemble moving humans or animals, built to impress and/or to entertain people.

“Automaton”
An atmospheric introduction to what is about to come. Includes a live sound bite from the band’s original vocalist the late Dave Lepard, pulling on the memories of the hard-core fans.
“Together Whatever”
A true party anthem…Exploding into raging guitars, scorching vocals, this is a tribute to the decadent good old days and the band’s early roots.
“Shine On”
In this all or nothing / going to the top, driving wall of sound.
With this song, the band sets its album mission… No compromises.
“No Man’s Land”
It’s a story about looking inwards and a hard charge moving forward, no matter what the costs…Sang with powerful and precise vocals, surrounded by thick driving bass, heavy guitar chops and rock-solid drums.
“Darker Minds”
A powerful rock ballad, thick with layered vocal harmonies and driving rhythms. A song about feeling something is not right and questioning if a change is about to come.
“Dead Crusade”
One of the heavier tunes from the album. The chugging wall of guitars makes you wanna
levitate while a brilliantly performed, syncopated drum-track keeps you totally grounded.
A dark song about the afterlife…
“Powerline” (feat. Michael Starr)
The first-ever featured guest appearance on a Crashdïet album.
This anthem tune gives you a soaring duet between vocalist Gabriel Keyes and the infamous Steel Panther vocalist Michael Starr. A powerful call to the wild.
“Resurrection of the Damned” (Explicit)
A heavy blaster, direct from the veins of classic heavy metal, drawing from the band’s early influences circa 1989…When you’ve been pushed around for most of your life you probably have a lot to say about it (and it’s not gonna be nice), you’re gonna scream for it to stop and resurrect the damned.
“We Die Hard”
The notorious ways of the never-ending road. The life we choose…
A contagious mid-tempo rock anthem. A tribute to all the vagabond wanderers.
“Shell Shock”
A slow-driving powerful rock chugger full of dynamic vocals, guitars and gang-chorus shout-outs. A song about what happens when your temptations have taken over.
“Unbroken”
A fast-tempo punchy rocker with guitar driven melodies, powerful vocal ranges and some surprise feel changes that will keep you on your feet.
Defiant and never looking back…
“I Can’t Move On (Without You)”
An airy 12-stringed acoustic guitar sets the feel of this classic rock ballad, featuring an astounding vocal performance complete with fat orchestral arrangements.
A beautifully sensitive song, building up to a massively powerful ending.

With the motto “go big or stay home” Crashdïet formed in Stockholm back in the year 2000 and brought in the new millennium with full-throttle speed and excess. Crashdïet released their critically acclaimed debut album Rest in Sleaze in 2005, giving them a spring of success in their home country of Sweden and abroad. Shortly after, their frontman Dave Lepard was found dead at his home, the result of a tragic suicide in January 2006.

With a career littered with abuse, tragic deaths and lineup changes, it nearly ended the band more than once, but the band have become known for picking up the pieces and returning to the scene of the crime… every time. The surviving band members and new blood have carried the glam-metal sleaze-rock torch ever since, touring the world and releasing many acclaimed studio albums.