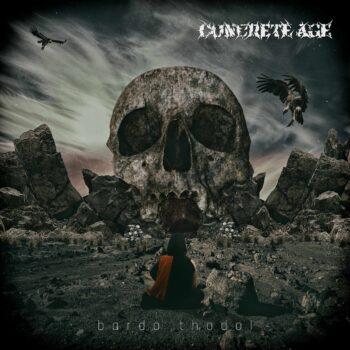 Full Of Mystery, How Many Albums?

Sometimes as a reviewer, a new name appears in your inbox to review. You click on it, like what you hear, and decide to find out more. Then you get a surprise when you find out the band has a bunch of albums out already (7 in this case). Finally, you wonder how you missed them until the email offering you the chance to review came in.

That was my situation on opening said email with a stream for the newest album by Concrete Age. On Googling I found some oddities or mysteries regarding the outfit as I couldn’t find out definitively who is on the first 3 albums or so. I have no idea if any of the members are original, with album number 3 Under The Concrete Sun definitely having singer, guitarist and man of many ethnic instruments, Ilia Morozov on it.

The band describes what they play as “ethnic death thrash” but I don’t think that does them justice. There is much more to their sound than that. The new album’s name is the name of the Tibetan book of the dead which in itself (and I quote) is “a funerary text whose lessons form a pathway to guide souls from death to rebirth. It teaches of an intermediary realm of essential wisdom, terrors, traps… and give the potential to ascend to bliss or fall into torment“. Heavy stuff.

The band (at least some of them) hail from the Balkans and North Caucasus somewhere in the South Western area of Russia (again that is according to what I can find on the net. If I am wrong then feel free to correct me), although they are now based in London England. Outside of the aforementioned Ilia the band are composed of Boris Zahariev on guitars, Giovanni Ruiu on bass and finally drummer Davide Marini. The album contains 10 songs that are full of foot-stomping riffs and folky melodies which make one want to dance around the place like a madman (or woman).

“Hex” gets things underway with lots of Eastern promise, acoustic-style stringed instruments and chanting before heavying up into a full-out thrash attack. The track floats between that and the lovely tribal melodies in a sort of Sepultura-type way. If you can imagine Orphaned Land, Bloodywood and the aforementioned Seps then you can imagine what it kind of sounds like.

“Purity” heads into death metal a little but there is always little touches of their cultural roots (“Bloody Roots“) coming through. I thought a little of Korpiklaani at points. The drumming is or at least sounds at times like bongos (or the equivalent from their area) played by hands rather than a kit with sticks. I can imagine folks Cossack dancing to the tribal sections (not by me, I would fall over attempting that). 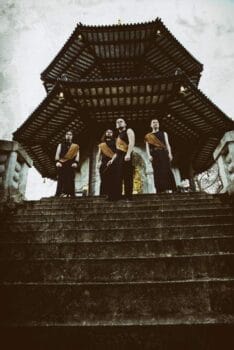 “True Believer” is one of my favourite tracks on the album. There is an air of mystery about it, the opening again having a sort of Orphaned Land vibe before a mid-paced thrashing riff comes in. Strangely at the chorus of “666… True Believer” the riff does remind me of the 90s dance track by 2 Unlimited called “No Limits“, but that just might be me! It is a belting song and a dance floor filler with some great vocals through it.

“Threads Of Fate” turns into a quite playful piece halfway through. The opening is rather cinematic and the verses are heavy and frantic. They combine all the various elements cleverly and that makes it a really good listen. “Trite Puti” is apparently a Bulgarian folk dance which to my ears is almost like a full on Scottish Ceilidh track. The mix of jaunty folk and heavy grooves is simply joyous. It is full-on metal madness. I can only imagine how good this would be to hear and see live, especially if everyone starts throwing each other around the floor with great gusto.

“Lullaby For A Dead Man” is a mix of folk, thrash and death metal. No matter how heavy it gets the song never loses that folk vibe (there are I think some sort of pipes on this). The solo is utter thrash metal, fast and furious. It goes through a few transitions between styles and even in vocal delivery. The title track is a mid-paced stomper which swings along nicely, or until it changes into a brutal riff and some very tribal-sounding chanting. It bounces along more than Tigger in a very happy mood.  The breakdown in the middle is acoustic/electric and mad as a box of frogs. I have a grin on my face every time it comes around!

“Ridges Of Suffering” has a bit of a movie soundtrack vibe in parts while still being heavy and folky. The verses are thrashy, the choruses melodic and as a Scottish person I do feel there is a definite connection between the folk music here and where the band originate; there is a similarity to the Celtic music I grew up with. The fast-flowing melody on this is wonderfully exuberant, you cannot help but be carried along with it.

“Thunderland” has that Nordic Country style riffage mixed with pipes and I think a Jew’s Harp (it sounds like one) and so marches along stamping its feet and prepares for battle (possibly). It gets you in the chest, ready to fight all enemies. There is a bit of both Manowar and Rammstein without sounding like either, but rather in the presentation or militaristic style. Anthemic as fuck. Again I can only imagine this with an audience of metal fans who are up for a party. Good times guaranteed.

The album closes with quite a short musical piece called “Bezdna Ot Ludost” about the Russian peasant uprising in the town (primarily) of Bezdna in 1861. Between 100 and 300 were killed or wounded in it. It is quite frantic at times (maybe in keeping with the event) but with a very folky section on acoustic guitar then on electric, playful and slightly mad.

This Could Be Your Next Favourite Band

This album has come as a very pleasant surprise to me as a writer. Yes there are clear influences coming through, but at the same time they have a bit of their own identity going on, I suppose being nearly 10 years into a career (if the individual members have been there that long) helps to focus an identity.

Anyone who enjoys or loves a mix of thrash, death, folk will absolutely dig this album. In fact, if you are reading this review having never heard the band before then I think some folks will be hearing their new favourite band in this crossover genre. There is enough trashing metal madness whilst allowing them to explore their own countries musical styles creating a fabulously fun and energetic listen. I am not sure of what extra instruments they use on the album, so have guessed on what they sound like to my ears so any mistakes are mine and mine alone. It is only early January… this is my year off to a fine start, feel free to join me in the fun! Album out January 6.