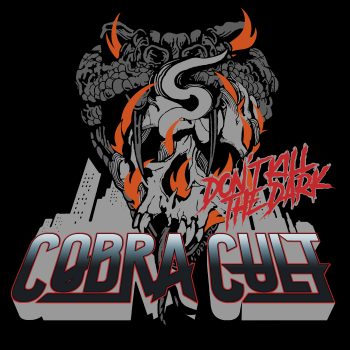 The rock ‘n’ roll machine from Stockholm is back! This is the first single from the brand new upcoming album Don’t Kill The Dark. Ten songs filled with Cobra Cult trademarks, this is the natural development of the two previous ones taken to the next level. Intense, and riff-based hard rock originating from punk and metal with catchy harmonies and personal vocals that stands out. This combination gives the band a unique sound like nothing else out there.

The band was formed in late 2015 and are known to be an intense live performance band who have toured throughout Sweden, Norway, England and Germany. The debut album Cobra Cult was released in November 2018 and draw the first light to the band. Produced by legend Tomas Skogsberg at Sunlight studio, Power Play Magazine described the album as, “Just heads-down, uncomplicated, three-chord metal done right”. Extensive touring in 2019, including a performance at Sweden Rock Festival, led the band to signing a record deal with Swedish label GMR Music. In 2020 the pandemic held the world in its grasp and the band spent much time writing on the sophomore album. In March 2021, Second Gear was released and the album was very well received and got great reviews all over. Metal-Rules.com: ”With their second album, Cobra Cult bring oxygen to the music scene, delivering good old hard rock that never disappoints and engages the listener from the very first track”. The album was produced by Robert Pehrsson (Robert Pehrsson’s Humbucker, Death Breath etc) and mastered by Joel Grind (Toxic Holocaust). For the new album, the band once again teamed up with Robert and Joel with the result standing for itself. This is Cobra Cult, album number 3 – Don’t Kill The Dark.