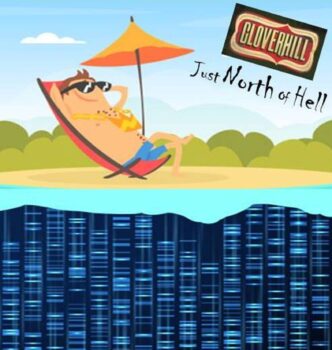 Cloverhill are a band I first found out about last year when they were a very late replacement at Wildfire Festival in Scotland for a band that were “pinged” due to Covid and had to pull out. The 3 piece took to the stage and thoroughly impressed everyone watching, so much so that folks were asking if the band could play again as an official act this coming year, which I can confirm they are. The band are from Burnley in England, although bassist Marcio Couto is originally from Brazil and now resides there. One of the things that we all noticed watching this 3 piece was how damn good the rhythm section were. The bass was right in our face, the way personally I prefer it. Singer and guitarist Paul Laskey was full of praise about his 2 bandmates when I had a quick chat after their set. The band on the day was so tight, had very catchy songs and even included elements of 60s rock like Jimi Hendrix and Cream which gave them a sound that stood out in an excellent lineup of bands. The band met in a venue in Burnley called The Shift where musicians regularly jam and since then have recorded 2 albums with their third Just North Of Hell coming out on Friday, February 4. The album also features on a couple of songs, ex-Dream Theater keys player Derek Sherinian!

The album has 11 songs and runs around the 40 minutes mark. They are not scared to experiment mixing in some funk and even country into their old school classic rock repertoire. The title comes from the last song on the album called “Leave A Scar” where he sings that he is “just south of heaven, just north of hell” with the track being about going out drinking on a Friday night admitting he “won’t be sober after 7“. All he wants is someone to point him in the direction of a place to get “some beer and rock ‘n’ roll“. The track oozes good time honky tonk (courtesy of the piano especially) and is the sort of thing that the early Faces did and was revived for a short while in the early 90s by The Quireboys. It is fun, upbeat rock with groove and easy lyrics to join in with.

Have Fun Spotting The Lyrics:

Right from the start, they are paying homage to the bands that many of us grew up with even having some fun throwing in either lyric lines or song titles (and at least one band name) from other artists into the song as they encourage us to “Get Up“, to “let your hair down” (impossible for this reviewer these days) and have some fun. The bass is fuzzy, almost thrashy with a 60s style riff from the guitar. The riff under the solo is familiar-sounding but keeps things grounded for the guitar part. “Radio” keeps the good time vibes going. It looks back at a time when rock got played on radio, although to my memory we did still have to look for it in the UK! It points out that even though rock/metal etc may be seemingly “unfashionable” we don’t care. It’s what we like and we are going to crank it up whether anyone else likes it or not. They even manage to throw in a nod to Judas Priest in the “heading out on the highway” chorus part. Kudos to getting the words “gilded cage” in a song, possibly the first time since Rush managed it back in 1981!

On “Talk Dirty” they find their funky edge. Some lovely drumming, utterly groovy (baby) stuff from Jon Hollins and the bass takes centre stage at the chorus. Much of the verses are bare, vocals with some drums as a backup. Lyrically it is in the “Gimme Three Steps” territory by Lynyrd Skynyrd as it is about getting involved with a woman who as a bruiser of a boyfriend you weren’t aware of until he shows up. “On Fire” again has drums high up in the mix and is almost the focal point, apart from in the organ solos which are a cool addition to the 70s vibe and sound. The guitar at the latter stages mimics the organ melody line and they swap back and forth. It sounds great, very authentic but fresh and new.

“Angels” strips things down a bit opening with acoustic guitar and is slightly folky or country with 60’s style lyrics, definitely a hippy vibe going on. It seems like it is about redemption, looking for guidance from somewhere. It has a lovely sweet emotional guitar solo, although I would have liked it to go on a bit longer, it was in my view too short, it was so nice I wanted more! The spacing is great, which allows all the little drum touches and flourishes to be heard and enjoyed. “Gimme Some Flesh” is sort of laid-back funk with wah-wah guitar effects going on throughout it. “Lovely Rita” has a very cool opening where we get to hear all the soft cymbal touches before the actual groove kicks in as well as around the chorus part. There is also some very lovely bass work around the solo which is effective in giving extra punch to the sound.

It goes a little heavier in “Up To 11” where he sings about the joy and power of rock and roll! It has a driving feel with a fun slightly cheesy chorus (nothing wrong with that) that live is set up as a crowd-pleaser. From the opening lyrics of “brothers, sisters, we are gathered here in the church of rock ‘n’ roll” to “in this place all our troubles are lost without trace” we get the idea that this music that we love is a place where we can escape the crap that might be happening around us. I am sure we have all felt that whether at gigs with friends or even in the pleasure of listening to a great album at home. This music is “in your soul“. This reviewer remembers when as a teen getting into rock and metal being told that “you will grow out of it“, and it was a “passing phase“. Strangely even then I knew in my heart that wasn’t the case. I told my parents and any others who thought the same that I would be into this music forever. Here I am over 40 years later still as excited about new rock/metal/prog/blues music than ever. It got in my very soul, it is a part of who I am. This is a great fun song with attitude and a sense of truth.

“Guinness And Whiskey” is obviously an ode to 2 alcoholic drinks. This is very Hendrix in sound and style. Due to the rhythm section, especially in the way they hold things down and their fills in the chorus there is also a Cream feel to this. Yes, it is very late 1960s and early 1970s but once again it still seems fresh and it has great energy. “Beach” is the absolute curveball on the album, featuring what sounds like electric slide steel guitar and is really a country song. It is a lovely piece about a lost love wondering if they are still who they used to be, if they still like the same things as when they were together. Some rockers will be terrified at the mention of “country” but I admire the cojones to step out and do something completely different. It certainly shows their versatility whether some like it or not.

A 3 Piece That Stand Out:

A very fine album by a talented 3 piece who can be counted as part of the “new wave of classic rock” but have slightly different influences coming through giving them a sound that makes them stand out a little in a very busy but excellent field of new bands and artists. I love the way that the music has space to allow the drummer to not only add little inflections but for those touches to be actually heard clearly along with the fact the bass is high in the mix to be heard and enjoyed. Plenty of the songs can easily be joined in with in concert which is an added bonus. The band as I said earlier will be playing Wildfire Festival in Wanlockhead Scotland the weekend of July 1 to 3.

The album is out digitally Friday 4 February! See HERE