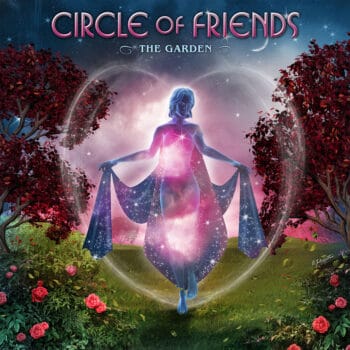 CIRCLE OF FRIENDS – The Garden

The Garden is the album put together by Bruce Mee as a tribute to his late mother, who died of cancer in 2020.

Called Circle of Friends because the majority of the singers appearing on the album are personal friends of Bruce and Khalil, and were all willing to help bring this wonderful concept to life.

Growing up in the 70s/80s, Bruce developed a love for Melodic Rock, his first-ever live show being when his mother took him and his brother, Chris, to see Alvin Stardust in 1974. But it was in 1978 when Chris bought Rainbow‘s Rising that Bruce’s musical taste began to turn away from ABBA to the more hard-rocking strains of the likes of Blackmore, Dio, Magnum, Survivor, Dare, Bonfire, Night Ranger and many others. Of course, a strong love for ABBA still remains, explaining the gorgeous cover of “Knowing Me, Knowing You” by Robin Beck on The Garden.

Over the years, certain other songs appealed to Bruce, almost demanding to be updated to a more modern sound. Tracks like Blondie’s “11:59“, BOC’s classic “Don’t Fear the Reaper” and the little known Fierce Heart song “Never Gonna Make Me Cry“, which should be revered in the same company as Journey’s “Don’t Stop Believin’” and is given a phenomenal work-out here by House of Lords’ James Christian.

Of the 13 tracks, 4 are covers. The remaining 9 are originals, most written by Sweden’s Mikael Rosengren and his co-writers. Jaime Kyle brings her own song “Take My Love To Heart” to the CD, with backing vocals supplied by the likes of Kevin Chalfant (The Storm, Two Fires).

On guitar, we have special guest Joel Hoekstra of Whitesnake, along with Steve Mann, Tommy Denander and more.

Mixed and Mastered By Fredrik Folkare