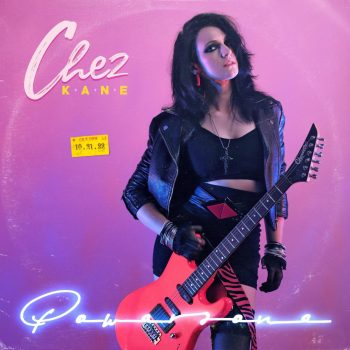 Fans of Chez‘s debut can expect all the things they loved about that album, this time turned up to 11, to once again delight them on Powerzone! A new single and music video from the album, titled “I Just Want You“, is out now. Check out the previously released single “Powerzone” below as well.

A talented young vocalist who fronts, along with her two sisters, the band Kane’d, Chez was first brought to the attention of the label after conversations with Danny Rexon of Crazy Lixx about the possibility of him scouting and producing some exciting new talent. Subsequently, Danny started working on some demos with Chez and the label did not pass up the opportunity to get involved with this incredible talent. Chez‘s debut solo album embraced the melodic rock style that both she and Danny so admire, while adding a new twist to the current takes on the genre. Powerzone takes that formula and makes it bigger, better, and bolder.

Chez‘s star rose, and deservedly so, with the release of her self-titled debut album. Now, with Powerzone, she’s really ready to launch into orbit. Armed with an incredible voice, a downright charming personality, a talented backing band, and the guiding hand of producer Danny Rexon, Powerzone is primed to be THE melodic rock album of 2022.