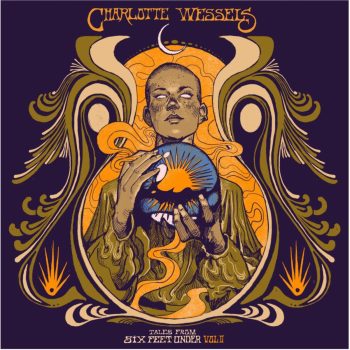 Starting with the captivating synth-flavoured track “Venus Rising”, CHARLOTTE WESSELS lures the listener into her multifaceted world of sound to be spellbound within the blink of an eye. Following “Human To Ruin” mesmerizes with a sweet melody that breaks into a propelling metal track, where calmer parts alter with powerful breakouts. Wessels releases her power on other commanding tracks like “The Phantom Touch” and “Good Dog”, while on “The Final Roadtrip”, she presents the full range of her vocal prowess atop carefully balanced electronic beats and indie soundscapes. “Toxic” comes with an obscure, captivating whispering sound that turns into a strong sonic wall, as the album then fades out with the honest atmospheric gems “I Forget” featuring a cello performance by Elianne Anemaat, and “Utopia”.

This eclectic wealth of songs proves WESSELS’ exceptional ability to express the sincerest feelings and emotions within her art and her distinct intuition for the combination of seemingly different genres. Tales From Six Feet Under Vol II is an enchanting portent of CHARLOTTE WESSELS’ further multifaceted endeavours.

“Since May 2020, I’ve been writing and recording a new song every month down in my basement Six Feet Under Studio, fueled by – and released to – my tight-knit Patreon community. This album wouldn’t be there without them. I’m excited to team up with Napalm Records again to release a new collection of these tracks with a wider audience.

With Tales From Six Feet Under, I released my favourite tracks of the first year of this endeavour onto the world in 2021, and Tales From Six Feet Under Vol II is its counterpart, with my favourite tracks from the second year. There are definitely differences between the two, with the second leaning more towards the heavier side, but they do belong together.

Together they represent a time of introspection and solitary songwriting in the basement. A time that has taught me a lot and has been very meaningful to me, but also a time that, as I started this project in the middle of Covid quarantine, has already – thankfully – started changing. Not because I won’t be writing and recording Six Feet Under anymore, but because as the world is opening up again, I too will come out of the basement and out of my shell again with live concerts, and collaborations are on the horizon.”

TOXIC will appear on Tales From Six Feet Under Vol. II, out October 7th 2022.