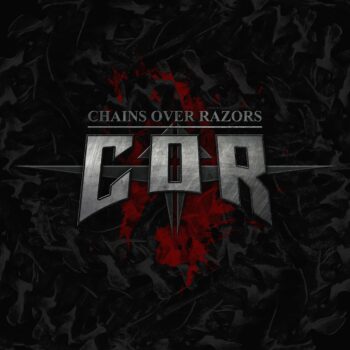 CHAINS OVER RAZORS – Chains Over Razors

Crossing paths in a recording studio talking about music, twin brothers Mikey V & Andy V along with vocalist, William Mullen, set to re-write the rules of heavy metal as a 3-piece by twisting arrangements, melodies, and grooves in ways thought to be impossible, creating and defining the sound of Chains Over Razors.  This caught the attention of legendary rocker, Carmine Appice (Ozzy Osbourne, Vanilla Fudge, etc…), to executive produce the group’s latest self-titled album and guide their career to new heights. Edgy, twisted, and ruthless is how many describe the outfit. The album was mastered by Alan Douches (Mastodon, The Dillinger Escape Plan, etc…) at West West Side Music.

The band has just released the first single “Behind These Eyes” and, drummer Andy V, had this to say about the meaning of the song, “Pure Rage and Self reflection. The song represents the best and worst of yourself.”  Deko Entertainment was excited to work with the band after Carmine Appice sent the label some of the bands material, President Bruce Pucciarello comments, “Chains Over Razors well represents a new generation of talented musicians, all devoted to expanding Metal boundaries.  And if the Metal doesn’t bend, these guys just blow torch it.  Explosive and exciting new music.  COR is Deko rated AAA+ for chaos.”, Mikey V continues, “We are excited to be part of the Deko Family, a company that will break and rewrite the rules of the music industry. Together, we  have formed a lethal combination.”

The full album drops on March 25th and features other stand out tracks like “Broken Home” and “The Narc”.  The band has already cultivated a loyal following and has made the press take notice of their no holds barred full throttle approach to their music.

Chains Over Razors – Behind These Eyes (Official Lyric Video)