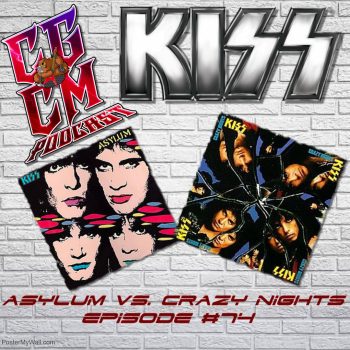 It has been a while since the Canadian Geeks recorded a KISS themed episode. During a recent strategy meeting at a remote Northern Ontario location (Wallygator’s Cottage), the hosts decided this was long overdue. There was a problem though.

There are hundreds, maybe thousands of Kiss podcasts out there. Pretty much  KISS related topic has been done before. They decided they had to come up with something unique and original. Something that KISS fans world wide would stop and say “This is Awesome”!!!

Then as usual, Wallygator and the Meister consumed vast amounts of alcohol and started one of their “all too common” arguments. This one was which album was superior? 1985’s Asylum or 1987’s Crazy Nights.

After some heated banter and a number of insults thrown back and forth Wallygator exclaimed that this just might make a good podcast. Probably not his most original idea, but then again he was somewhat intoxicated.

Knowing full well that both hosts would simply butt heads on the topic, they knew an impartial third party would be required. A “mediator”, “referee” or simply a “sober” set of ears to act as the swing vote when necessary. Enter www.cgmcpodcast.com writer Trevor “Psycho One” McDougall.

80’s Kiss was a very polarizing time for KISS fans. The non-makeup years provided some amazing albums and tours. Not all KISS fans came along for the ride and unfortunately (for some of us) the reunion came along to end this chapter of the band’s history.

Only a small handful of songs would move forward into the setlists of the tours that followed. For those of us that discovered Kiss in the 80’s and proudly carried the torch through these glorious years, it seems a shame. An entire decade of music all but ignored.

Ignored but never forgotten. We love 80’s KISS and we decided to start with 2 of the more “maligned” Kiss albums. Which album comes out on top? You will have to listen to find out.

As you would expect, there are lots of arguments, insults and thanks to Trevor some actual facts about the albums and songs.

So here you have it, Asylum vs. Crazy Nights. Enjoy and then head over to the Facebook page and let us know your favourite!!

Feel free to like and share, but most of all if you like what you hear, support the artists and buy the albums! AMAZON.ca / AMAZON.com. To continue the mayhem check out our Audio Episodes and rate us on Podchaser!Furthermore, the CGCM Podcast is proudly sponsored by The Farm Rehearsal Studios/Farm Rocks Build-A-Band Program in Markham, Ontario. And by Cloven Hoof Rum in Brighton and Hove, UK. In co-operation with King Art Music Management/Promotion, in Helsingborg, Sweden.