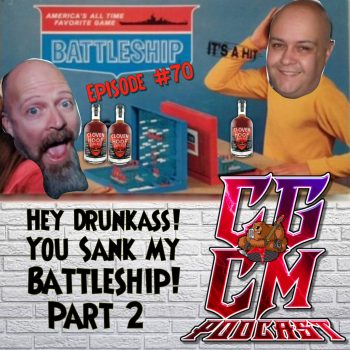 Alright, way back on Episode #59 “Suppositories, Whiskey and Wine” I somewhat proudly warned you all that it was our most drunken episode yet. Well that lasted for eleven episodes. We apologize for what you are about to hear.

On the evening that we recorded the Suppository episode, it turns out we actually recorded two episodes. The second of those episodes was put into the CGCM vault and was left there just in case of an emergency shortage of Canadian Geeks Chatting Metal!!!

Turns out, it was necessary to venture into the vault sooner than we expected. We pulled out this mess and realized that neither one of us actually remember any of the recording of this episode.

Welcome to Part 2 of the Meister’s Battleship Game. The concept is loosely (very loosely!) based on the Milton Bradley game Battleship. In reality it’s just an excuse to randomly select songs from the Meisters massive music collection and share them with you.

Sounds awesome but the Meister has both, an abundance of awesome music and an equal amount of “what was he thinking?”.

Load up the torpedo tubes as Wallygator randomly selects album coordinates and blindly unleashes twelve completely random songs. Will he hear the Meister scream “you sank my battleship!”?

You will hear the Meister incoherently count like a Sesame St character and plenty of drunken babble from your hosts. Again, our sincerest apologies for this mess of an episode. You will get some cool tunes and maybe some not so cool tunes. As always, beauty is in the eye of the beholder.

Kidd Blue – Come In From The Rain

R.E.M. – You Are Everything

Jeff LaBar – Nightmare On My Street

Feel free to like and share, but most of all if you like what you hear, support the artists and buy the albums! AMAZON.ca / AMAZON.com. To continue the mayhem check out our Audio Episodes and rate us on Podchaser!Furthermore, the CGCM Podcast is proudly sponsored by The Farm Rehearsal Studios/Farm Rocks Build-A-Band Program in Markham, Ontario. And by Cloven Hoof Rum in Brighton and Hove, UK. In co-operation with King Art Music Management/Promotion, in Helsingborg, Sweden.

It’s the most wonderful time of the year! The CGCM Rock Radio Top Ten Lists. Each and every year the staff at CGCM toil for endless hours listening to literally hundreds of albums and then select their own personal top ten favourite albums from the year past. The global pandemic may have robbed us of […]

The Canadian Geeks continue to come up with ridiculous ideas to play a bunch of music and drink beers. The Alphabet Game is just that. Round 2 of the Alphabet game was recorded at our new CGCM Studios, better known as the ROCKPILE! So the beer consumption is real, the stupidity is real and our […]