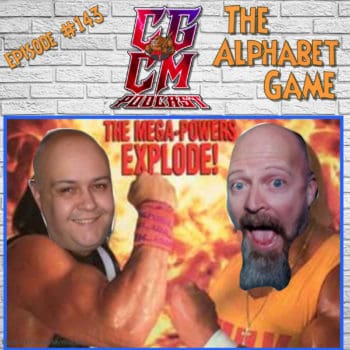 The Canadian Geeks continue to come up with ridiculous ideas to play a bunch of music and drink beers. Episode #143 is just that.

This episode is the debut of the Alphabet Game here on the podcast. It also marks a milestone as this episode was recorded in CGCM Studio B. The first time since the pandemic got its hooks in us. So the beer consumption is real, the stupidity is real and our special guest and referee is real! Everyone give a warm welcome to the powerful and attractive Mr. Diamond Dave Wood from CGCM’s Hard Rock Radio! You can catch his show each and every Sunday night at 8pm Eastern.

The Alphabet Game pits Wallygator vs. The Meister in a game of musical knowledge. The rules are explained within but it’s really quite simple. The geeks take turns choosing a band then they play a song from that band. The next band must start with the last letter of the previous band. This will continue until one of the geeks can’t come up with a band and they will receive a strike. Five strikes and the game is over. Sounds easy and at first it will be but the longer it goes the tougher it gets. As you may already know the geeks can get a little competitive, hence the need of an impartial referee to keep the idiots in line.

Feel free to listen, like and share, but most of all if you like what you hear, support the artists and buy the albums! AMAZON.ca / AMAZON.com. To continue the mayhem check out our Audio Episodes and rate us on Podchaser!