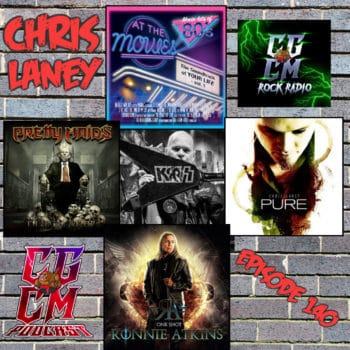 Episode #140 of the CGCM Podcast has the Canadian Geeks delivering yet another in depth interview. This will mark the 5th interview in a row! Tonight’s show puts the spotlight on one of the unsung heroes of the Swedish hard rock/metal scene. Multi-instrumentalist, music producer and proud member of the KISS Army, we welcome Chris Laney to the show.

After a number of failed attempts to schedule a sit down, Chris just told the guys to pick a day and a time and he would be there. In true Canadian Geek fashion, they selected a time interrupting a Laney family bbq. True to his word, he donned the ear buds and was ready to share some time with CGCM Radio.

Getting the interview started, they get Chris’s 2021 perspective on a couple of old interviews from Chris’s past. They discuss the current state of the Swedish rock scene, his solo albums and why exactly Robert “Mutt” Lange is a God. Pssst, it might involve Nickelback.

Also discussed is how Chris Laney came to become a member of Pretty Maids. His work on the excellent Ronnie Atkins’ solo album One Shot. An in-depth dive into the pandemic project “At The Movies” where Chris hints at a Part 2 for this project.

Before letting Chris salvage the evening with his family, we chat about him producing the next Madam X album and his time in Randy Piper’s Animal. Lastly Chris ranks the KISS Solo albums first to worst.

Thanks to Chris for putting up with us and more importantly thanks to his family for letting us crash the BBQ.