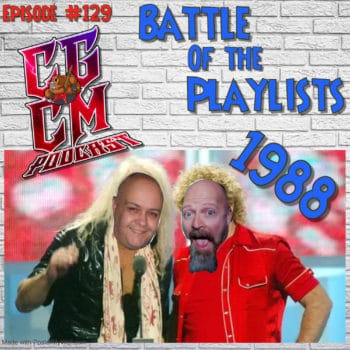 It was almost 4 years ago when the Canadian Geeks embarked on the “Battle Of The Playlists”. It’s a competition of epic proportions. The Geeks each prepare a 6 song playlist of songs that were released in the calendar year they are battling.

Each playlist is played uninterrupted in it’s entirety. Identified as simply playlist “A” and playlist “B”. You the listener will have no idea which playlist was created by which host. It’s all about the music and nothing to do with which host is better looking. Good thing because Wallygator makes a damn sexy David Lee Roth on the show’s artwork this time!

The rules are simple. Listen to the show and then head over to the our CGCM Radio Facebook Group page and cast your vote for the playlist you dig the most. This battle is #9 in the bigger war that is being waged. So far the score is tied 4 – 4 with only 3 more battles left to decide the Champion in this Decade of Decadence!

1988 Battle of the Playlists

Who will hoist the championship belt? Who will sip champagne from the coveted trophy? There is only 2 more years left to battle after this and one of your hosts will be named the Decade of Decadence Playlist Champion!! So grab a beer, enjoy the tunes and then vote, vote vote!!!!