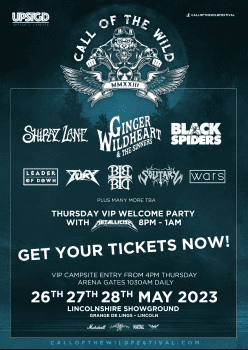 As the 2022 outdoor festival season draws to a close, Call of the Wild 2022 should be a distant memory – but that seems far from the truth!! As avid festival goers ourselves, meeting you all at events throughout the summer, seeing you wearing COTW T-shirts and hoodies as badges of honour, and as
social media still testiﬁes, 2022 was very special for many people and still very fresh in many minds.

We have been humbled by the feedback and listened to your suggestions and can’t wait to get the ball rolling with this little tease of an announcement showing what is a small part of what’s to come for 2023.

First of all, we are thrilled to conﬁrm that both Black Spiders and Ginger Wildheart & the Sinners will headline our Southall Lawless Stage. Organisers describe when booking the Black Spiders they found the very band they knew would bring the thunder to Call of the Wild. “Black Spiders bring the party and they bring it hard – one of the ﬁnest live shows on the British circuit” – Metal Hammer magazine.
Ginger Wildheart & The Sinners were formed in August 2019 when Ginger
joined forces with Neil Ivison and Nick Lyndon from the band Stone Mountain
Sinners. “From roots country to rock n roll and Americana, Ginger Wildheart & the
Sinners couldn’t have come along at a more suitable time. We were on the lookout for a band with this vibe and as soon as we heard the songs, it was an easy choice” – Raz White

“When the fans speak, we always listen,” states COTW booker Raz White. And from the many requests, organisers are delighted to welcome back Finnish rockers Shiraz Lane. With the release of new album Forgotten Shades of Life it’s clear to hear that Shiraz Lane have cemented their place in rock history.

Joining the bill are West Midlands heavy metal act Fury. Their love of the old school metal of Iron Maiden and Metallica are clear, but the rich and soulful voice of Julian Jenkins sets the band apart from the rest.

NWOBHM band Leader of Down were the brainchild of former Motörhead guitarist Würzel. Sadly, we lost Würzel in 2011 but the band carried on, still packing a mighty riff-laden punch.

Solitary promised to Thrash Forever, and continued proudly hoisting the UK Thrash ﬂag high throughout the pre millennium lean years. Solitary continued to deliver the goods when everyone else gave up. For almost three decades their commitment has been unﬂinching, their integrity unquestionable and the comparisons to the 80s Thrash legends humbling, but in all honesty truly deserved.

Continuing to bring the heavy vibes, Metalcore quintet Wars do an excellent job of approaching their task with the kind of songwriting dexterity that should help separate them from the crowd. Latest album, A Hundred Shivers, gained critical acclaim from Kerrang! describing it as a “battle-hardened metal gem”.

If you wanna “Rock ’n Roll all day & Party every night” you invite Beth Blade and The Beautiful Disasters to the festival, with their recent album Mythos, Confession, Tragedies And Love featuring the Classic Rock-nominated hit “Sin Eater” Call of the Wild have no doubt the band will be bringing a lively set to Lincolnshire Showground in May.

Tickets have been selling fast since they ﬁrst went on sale back in May. VIP is getting close to selling out and now that organisers have conﬁrmed the VIP welcome party on Thursday evening with guest band Metallicish, they are expected to go even quicker!

Call of the Wild Festival takes place at Lincolnshire Showground between 26th – 28th May 2023. All tickets & glamping options can be booked at: Tickets

Under 10s are free when accompanied by an adult.

Call of the Wild Festival, News