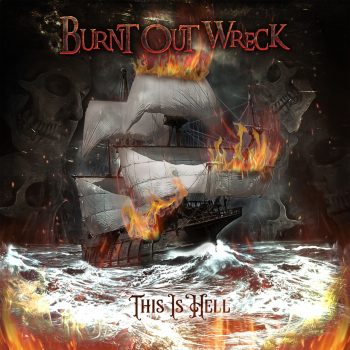 BURNT OUT WRECK release their new album This Is Hell on 11th October on Burnt Out Wreckords/Cherry Red.

New single & lyric video for “Dead Or Alive” is out now on Burnt Out Wreckords/Cherry Red.

This is the first track to be released from upcoming second album This Is Hell and
“Dead Or Alive” is a huge, riff riddled, classic good time rock ‘n’ roll tune and one that’s guaranteed to get you shaking off the dust and headbanging in serious fashion! A cracking track and an absolutely blitzing way for Burnt Out Wreck to start the lead in to the release of their second album.

This Is Hell sees the band ratcheting up the pace with this foot stomping, ballbusting hard rock album that’ll give the best of them a run for their money!

Quote from Gary Moat: “This is Hell, the title says it all. It’s a hard hitting, fast paced and more focused album. It’s an angry set of songs that follows on in the same vein as Swallow, but a bigger sound. It has drained me mentally and physically, made in eleven days start to finish, I cracked the whip on the entire band & they agreed it was worth it!”