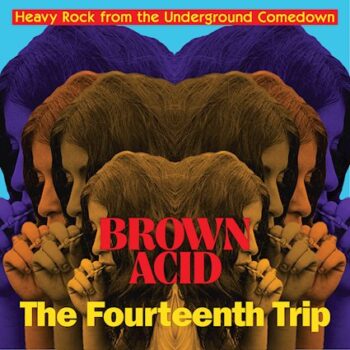 Brown Acid: The Fourteenth Trip: Out On Riding Easy 20 April!

Riding Records along with Lance Barresi owner of LA-based Permanent Records are back with another in the Brown Acid series. The albums are comprised of little-known acts (in many cases not known at all) from the late 60s and early 70s who perhaps only made one record that did basically nothing but are worth actually hearing.

To a large part this seems like a labour of love for all involved, music fanatics who want to give those artists some respect and to get their music out to other music fans who would dig these sounds/records. They try very hard to find the people behind the songs to make sure that they get royalties from these compilations (in some cases I believe even allowing the families to gain from their deceased relatives who wrote and recorded the songs).

The idea seems to have flourished as this is, as you can see from the heading, the fourteenth in the series. What generally amazes me is the quality on the albums. These are folks who didn’t make it big (or at all) but what they did record is totally worth hearing. I will write a little piece on each of the 9 artists, some there is more information on than others with my thoughts on each of the tracks as well.

Track 1: The Legends: “Fever Games“. This 1969 track features someone who went onto a successful career in Dan Hartman, who went on to play with The Edgar Winter Group, as well as having some solo hits in the 1980s (“Instant Replay” anyone?). The song name-checks bands and artists such as  Cream, Janis Joplin and n particular (and fittingly) Jimi Hendrix Experience which this song at times hints strongly at. It grooves along nicely with a couple of well-positioned and executed drum solos/fills to connect parts of the track to each other. It has a damn fine big finish with a short lead guitar solo!

Track 2: Mijal And White: “I’ve Been You“. This is their only 45 from 1973. The duo comprised Mike Mijala, a Detroit recording engineer, and local musician (who also worked around the studio) Mike White. Described as “bubblegum garage rock” this sounds like it was recorded either in the 50s or 60s. The notes mention there being a Moog synth on it, which might be the kazoo sounding solo on it, or maybe it is a guitar. It sounds odd but works.

Track 3: Liquid Blue: “Henry Can’t Drive“. Described as “meat and potatoes blues rock” this is the only release from the band (apart from the b side). There is a definite Hendrix lick near the start before it heads completely into Blue Cheer and Cactus territory. For 1969 this rocks hard. There is fuzzy wah-wah guitar at points and popping up here there and everywhere are some keys (organ) that add some extra texture to it all. There is a false ending before another groove-heavy piece of riffage which I just wish went on a bit longer. It is that good! 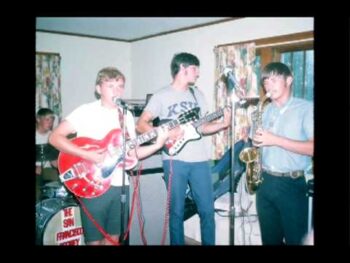 Track 4: Trolley Co: “Signs“. To give them their full name (apparently) The San Francisco Trolley Co. This is a rare A-side 45 from the early 70s which is another balls to the wall rocker. The info mentions MC5 and that is fair. What it doesn’t mention is that at points it leads the way to the very best 1970s 12 bar blues hard-rocking Status Quo. Very tasty indeed. My head was banging away, hell I nearly got into the Quo pose of head down no nonsense mindless boogie. The vocals are quite manic at times which I think heads the track more into MC5 territory. They had a sax player but he doesn’t seem to appear in this belter!

Track 5: Blue Creed: “Need A Friend“. This isn’t so much a band but rather one guy and some session players. Bill Rexroad (great name if real!) was a coal miner and songwriter, the stuff of movies in a way, actually financed the whole thing and the “band” never played outside of the studio. He put the guitar speakers in oil drums which may explain how it sounds. I would have thought it was an organ in parts but it seems like it was a trick of engineering. It is heavy psychedelia with a gruff as fuck vocal where he talks about the “world being fucked again“, if only he knew how things would eventually go.

Track 6: Transfer: “Play It Cool“. This is a rare 45 from 1974 which is described as “proto-punk” yet has a surfing-type vibe sound-wise through it.  “Play it cool, keep right on livin’, got no time for wine or women” he sings whilst seeming to extol the joys of toking up and beer. The riff is similar to something else that I can’t quite work out, but it is so damned sweet it doesn’t matter. Also whatever I can’t think of may have come after this so it could be highly original. Bloody good though.

Track 7: Appletree: “You’re Not The Only Girl (I Am Out To Get)“. The band was led by a gentleman called Gary Apple and is the outfit’s sole release in 1971. The B side was called bizarrely “The Ballad Of Pencil“. Your guess is as good as mine on that. The notes mention with good reason Grand Funk Railroad as a point of call. I will add Blue Oyster Cult to that and not only due to all the cowbell. There is a sarcastic feel to the lyrics, he doesn’t know why his girl is so upset seemingly after saying he has interests in others too. I think I might be able to explain why if he asks me. A solid riff and a strong guitar solo also adds to the fun of the song.

Track 8: Cox’s Army: “I’m Tired“. “Jimi Hendrix fronts Mudhoney” the press notes says. Good call there. Vocally it has that laconic Hendrix vibe. A truly gritty production with a bluesy shuffle. Also sludgy, grungy, definitely low-fi sounds. At one point it drops down to vocals and slight touches of cymbals which works excellently. “I’m tired of living up to what others expect of me” he explains before adding “it would be a drag if we were all the same“. He concludes that “if I get myself together, you’ll have the blues, not me.” Too damn right. 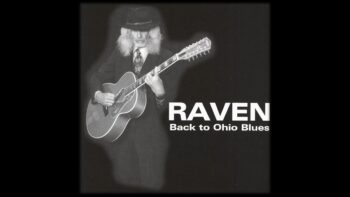 Raven 1975. Rare Album Mostly Given Away!

Track 9: Raven: “Raven Mad Jam“. Not THAT Raven. This outfit which very little is known about is from 1975. It seems to be a one-man outfit. This is a track from the 5 track album he/they made. He gave most of them away for free it seems. Then he/they disappeared. This is an 8-minute slightly bonkers jam that is dirty filthy and bluesy and goes from angry and pissed off to acoustic love crooning (if we can call it that) via a 2-minute drum solo. From telling someone to “get fucked“, to asking if you have “ever been fucked over” to eventually asking if we can “go make some more love“, this is a crazy rollercoaster ride.

Once again a fun collection of obscure tracks from way back when. Rough, ready but rocking. Anyone who loves the sounds of the late 60s and early 70s rock and appreciates no frills rock ‘n’ roll should find much to enjoy.  None of these bands made it big but that doesn’t matter. The work done in collecting these little treasures proves that there is always more talent out there than we can ever fully know. These are tracks that deserve to be heard by a wider audience. Highly recommended compilation once more!