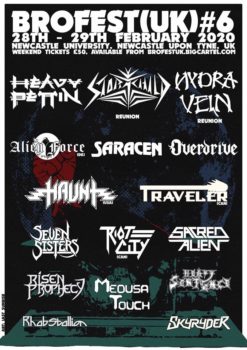 THE JOY OF SIX

BroFest is an irregular occasional heavy metal festival that takes place over two days in Newcastle-Upon-Tyne in the north of England.

This year, its sixth, the venue was once again a hall deep in the bowels of the city’s university, although a different, smaller one to the last festival which was held in 2017.

There were 16 bands rocking over two days (5 on day one, 11 on day two) at the fag end of February. For the hardiest of animals, there was also a pre-party at Trillians Bar with three more bands, including notable veterans Witchfynde.

The performers of the main event ranged from new, young bands, to reformed acts from the early 80s, and from AOR bands through to thrash. The underlying theme, however, was billed as a celebration of the New Wave of British Heavy Metal and to be fair there was plenty of that going on.

Overall the standard was excellent but there were some standout performances and so here is my own Top 5 best acts of BroFest 6. The full band list can be viewed at the end of the article. 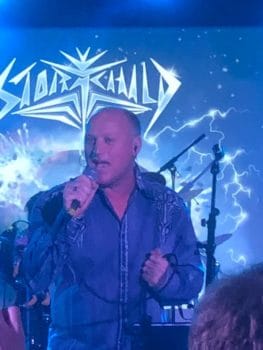 Stormchild were Saturday’s headliners and this was the British band’s first live performance together in 35 years. This long sabbatical probably showed a little but the strength of their set carried them through. All the songs they performed were from their 2018 album Lightning Never Strikes Twice and was a collection of strong melodic rock numbers. The crowd responded reasonably enthusiastically, but not in a way you’d want for headliners. Despite having a strong set I felt Stormchild were a bit high on the bill.

Third on Friday’s bill came US metallers Haunt and they brought the house down. Full-on metal was the order of the day and Haunt delivered. Lead singer/guitarist Trevor William Church was on fine form vocally, his powerful pure voice taking them to the next level. He wasn’t too shabby on the axe either.  All the material was taken from last year’s If Icarus Could Fly and this year’s Mind Freeze. The highlights were the title tracks from each of these albums. The band also had to deal with Daniel Wilson’s bass drum breaking but they took it in their stride and guitarist John Tucker filled the void with an impromptu jam while the drum was being replaced. These young guys are a top quality act and hopefully, they will go far. 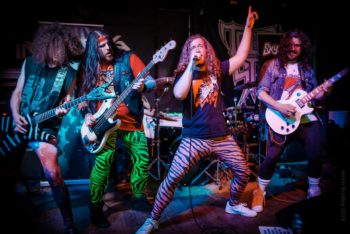 Being first on the bill at midday on Saturday at BroFest is an unenviable task but young northern spunkers Skyryder absolutely smashed it. They played classic NWOBHM with enthusiasm, and you could tell they were having a ball. Lead singer Luke Mills is a top frontman and played the game in such a self-effacing manner. The spangly spandex only added to the spectacle and it was a great start to the marathon of Day Two.

UK veterans Saracen played the last BroFest in 2017 and went down a storm. This year was no different as mainman Steve Bettney had the roaring crowd eating out of the palm of his hand. He is the consummate showman and knows how to work the crowd. It may seem like an odd fit, with a band of more of a prog feel at a metal festival, but it works, so who cares why?

With time short at 40 minutes per set Saracen rattled through their classics, opening with “We Have Arrived” and ending with “Ready to Fly” with more crackers like “Heroes, Saints and Fools” in between.

They really should have been top of the bill on Saturday instead of second and many of the crowd felt the same way, as a lot did not return for headliners Stormchild. Maybe next time, hopefully. 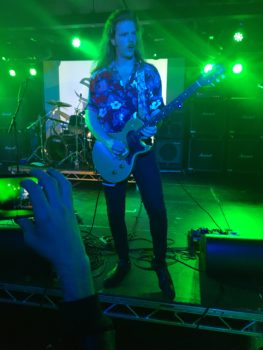 The least surprising thing about the whole weekend was how good Seven Sisters were. Coming on bang in the middle of the 11-band Saturday these Londoners blew my mind. As soon as lead singer/guitarist Kyle McNeill unfurled his man-bun you knew they meant business. Powerful and precise their take on the NWOBHM was an absolute joy. It also helps if a chunk of your material comes from one of the best albums of 2018, The Cauldron and the Cross.

The superb musicianship was matched only by their energy, which was epitomized by bassist Gareth Martin who headbanged and ran like a maniac for over 40 minutes. McNeill shared lead with Graeme Farmer and the partnership was sublime with solos and twin riffing at every turn. There was thrashing metal interspersed with tender moments but somehow everything fit together like hand in glove.

Another moment to note was this was the final show playing with drummer Steve Loftin who is moving on. He will be a hard act to follow.

Seven Sisters really are a class act playing quality songs and would not have looked out of place headlining one of the days.