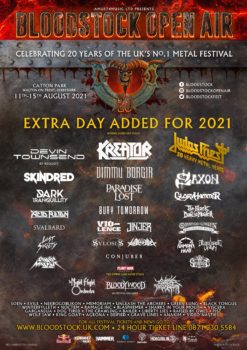 Bloodstock Metal Festival are preparing for the event due to be held in August at Catton Park. Obviously, there is an element of hoping that by then things can be held outdoors and that fans can partake in what will be 5 days of heavy metal mayhem! Already they have had to make changes from the line up that rolled over from the cancellation in 2020. One of the main stage headliners has had to pull out, however, they have already announced for 2022! This means another top act has been added. So let’s get into the changes…

First of all, Saturday will be headlined by German thrash metal legends Kreator! The band have played the festival 3 times before and the last time in 2017 they were special guests. It seems fitting that they will this time appear as a headliner raising the “Flag Of Hate” even higher. Frontman Mille Petrozza is very excited about the prospect saying “we are very excited to headline for the first at Bloodstock. This means a lot to us as all the previous shows we have played there have been exceptional. We promise you the most brutal show. Be prepared!”

Replaced Headliner Move To 2022 (And Other Postponements):

The news is that Mercyful Fate have already booked themselves in to headline in 2022 so they are desperate to fulfill the show but due to other commitments cannot do this (or any of their planned festival gigs) this summer. That is of course great news indeed!

Other bands which have had to postpone due to circumstances are Philip H Anselmo And The Illegals, Butcher Babies, Life Of Agony, Sacred Reich, Necrot, Exhumed and Unto Others. Obviously, Bloodstock know this may be a disappointment to fans of those bands specifically but they are hoping to welcome all of them to Catton Park in the not too distant future.

However, these gaps do allow some new additions (of which there will be more to come) and the first of those is for the Sunday on the main stage (the Dio) and that is Norse Shamen‘s Seidrblot who hail from the UK but have recorded videos in Iceland. It is magical mysterious music that uses folk instruments to great effect. Also on the bill for Sunday are melodic death metal outfit Bloodshot Dawn who played a few years ago on the New Blood Stage having come through M2TM competition. They are teasing that they should have a new album out before the event so new material looks to be promising!

Moving over to the second stage known as the Sophie Tent we have the return of British thrash metal titans Evile. They first played what was the “Unsigned Stage” away back in 2006 and have played twice since then, the last time 9 years ago so it is good to see them return. They have a new album called Hell Unleashed due out at the end of April on Napalm Records which is good to hear.

The Rest Of The Bill So Far:

Tickets are available from the link provided at the bottom of this news report and are still priced at £145 plus booking fees. The festival will take place (fingers and toes crossed) from Wednesday, August 11 to Sunday, August 15, 2021.