BLOODSTOCK: Line Up Change And Other Entertainment (Festival News)

With only a week to go Bloodstock have one or two changes to the bill and have laid out some of the other entertainment that will be on offer at the event to be held at Catton Park Derbyshire next week (11 to 15 August).

The organizers are on site already starting to build the staging so all engines are go! One band has had to pull out from the main stage known as the Dio Stage and that is the US thrash metal outfit Vio-lence, but 2 bands have been added onto the bill.

Wargasm UK: a London-based duo comprised of Milkie Way (possibly not their real name) and Sam Matlock who make some industrial flavored electronic music that is reasonably commercial sounding whilst still being heavy. They have covered “Lapdance” by N.E.R.D (some readers may be more aware of who he is than this writer) making it a heavy metal song with a touch of rap!

Malevolence: A band from Sheffield who are based on the friendship of two kids at primary school over their love of heavy metal. They formed their first band at 12 years old! The band as they are now have a mix of styles but vocalist Alex Taylor says they have “a weird, melodeath, kinda At The Gates vibe” going on. They released an EP last year called The Other Side which is on all streaming platforms to check out and buy.

In case anyone reading this is confused about Jinjer they are playing. It looked like they had had to pull out due to restrictions but that has changed. Good news indeed!

Other Things To Do At Bloodstock

Axe throwing. Yes you read that right. You can join in competing with friends at axe throwing. Being a complete accident-prone klutz I think I might only watch this!

Gaming: There will be a tent where some of the old computer games of yesteryear are set up for again friends to show off their skills and compete with one another.

Fairground: There will be the usual types of rides to go on including dodgems which at 11am still half pissed from the night before is particularly good fun!

Ram Gallery: For full details check our previous CGCMnews item regarding the festival. There will be exhibits from various artists who are involved with the rock metal and prog world including Mark Wilkinson of Marillion and Fish fame amongst many others!

After Hours Entertainment: DJ’s each night in the Sophie Tentdoing various themed nights and music from different eras of music. Not sure where but there will also be a silent disco on the site along with the New Blood Stage showing movies (in previous years it has been a mix of horror, music and comedy films). 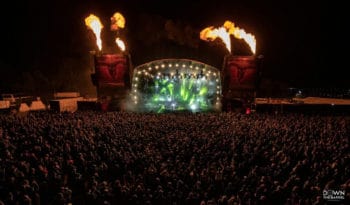 Bloodstock At Night by Down The Barrel Photography

Food: There will as always be stalls serving a wide variety of food, many of the stalls using local produce in keeping with trying to support the local area and to make the event as green as possible.

Some of the dishes that can be bought include burgers, pizza, tacos, burritos & quesadillas (even for breakfast), Belgian waffles, smoked meats, chicken, ostrich (all hail the Jack Daniels’ onions & stilton mayo), pie & mash with mushy peas, giant Yorkshire puds, gourmet ravioli, chips (including curly and sweet potato fries, or wedges).

Mac n’ cheese (in a wrap, if you must), cakes, nachos (even with vegan cheese), hot dogs, paella. Not to mention the return of Bunnyman’s Bunnychow (try the steak or vegan chilli in a hollowed-out loaf, with a garlic bread dipper), and a halloumi & falafel stand.

All food packaging is compostable so please recycle in the appropriate bins which will have been marked out. As for drinks, yes there will be tea, coffee, hot chocolate, cocktails, Jägermeister. Not forgetting 100 different ales and ciders on tap! There will be designated water points for free access to drinkable water throughout the festival. Just keep an empty bottle in your pocket (make it last all weekend) and stay refreshed.

Storage And Phone Recharging: You can book both at this Charge Candy LINK

Also on the Bloodstock site in the Midgard camping area will be the Samaritans. If anyone feels they are struggling due to mental health please feel free to look them out for a confidential chat. They will be there from Wednesday right through to Monday morning. 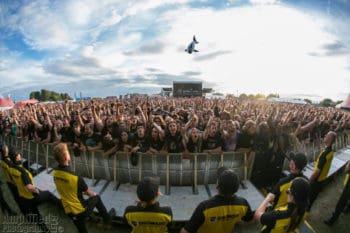 The event is sold out for weekend tickets, however there may be returns and they can be found at this Link

Day tickets are limited and can be found at this Link

Come All Ye Sinners! As the 2022 outdoor festival season draws to a close, Call of the Wild 2022 should be a distant memory – but that seems far from the truth!! As avid festival goers ourselves, meeting you all at events throughout the summer, seeing you wearing COTW T-shirts and hoodies as badges of […]