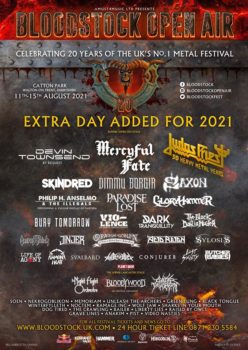 Bloodstock Metal Festival have announced a new headliner and a special guest for the Saturday night for the 20th-anniversary event being held in August 2021. With this year having to be postponed (like most events sadly) they are wanting to make sure they make up for it all next year. So without further ado, let’s get on with the news!

Will be legendary Danish metal outfit Mercyful Fate who are playing gigs for the first time in 20 years! Now lead singer King Diamond has graced the stage before with his own named band (back in 2013) and fans have been hoping ever since he would play there with Mercyful Fate. The time has come. For those who don’t know the band formed back in 1981 and released their first album two years later called Melissa (check out the title track below) which is a bona fide classic metal album. Mixing black metal with classic heavy metal with some progressive touches along with a dollop of theatre Mercyful Fate have influenced many of the black metal bands that are so popular even today along with artists such as both Metallica and Slayer. Much of their material is dark and Satanic in lyrical style and sung in an incredible falsetto which has been known to scare the shit out of some folks. The main man Mr. Diamond has said about playing Bloodstock “It is with sinister pleasure we will be bringing the Devil himself to Bloodstock summer 2021. We cannot wait and neither can he. It is going to be dark as hell”. Expect theatre along with screaming dark heavy metal to conclude Saturday’s main stage (the DIO) at Bloodstock.

Adding to the darkness as special guests we have from Norway symphonic black metal outfit Dimmu Borgir! They are almost regulars having played three times before (2008, 2012 and lastly 2014). They were due to play 2019 but personal health reasons meant they had to sadly pull out but they are preparing to make up for the disappointment by playing the Dio stage on the Saturday night. They always put on a show with theatre to add to their dark doominess so expect plenty of both next year.

These additions add to the bands already announced/carried over from this year’s postponed event including other Dio stage headliners Devin Townsend (request set) on Friday and Judas Priest (celebrating 50 years of metal) on the Sunday. Headliners for the second stage/big tent known as the Sophie Lancaster include The Night Flight Orchestra who will be bringing the 1980s cheese rock all the way from Sweden (Thursday), Bloodywood the authentic crossover of metal and local rhythms and instruments from the streets of India (Friday), Cattle Decapitation extreme brutality with a social conscience from the USA (Saturday) and finally, Unleash The Archers from Canada who play old school heavy metal with elements of prog metal fronted by a lady with a huge voice called Brittney Slayes who can certainly hold a note or two for long periods of time (Sunday).

Of course, there are lots of other bands to enjoy with another day being added making the festival five days long in 2021. Due to the reduction of VAT for the entertainment/hospitality industries the ticket prices are being capped for longer so the weekend (nearly a week!) ticket up until the end of January meaning you can still purchase for £145. The organizers have also sorted out an extended 6-month instalment scheme for those who financially may have taken a bigger hit due to the pandemic.  All the details are on the ticket link down below this news item.