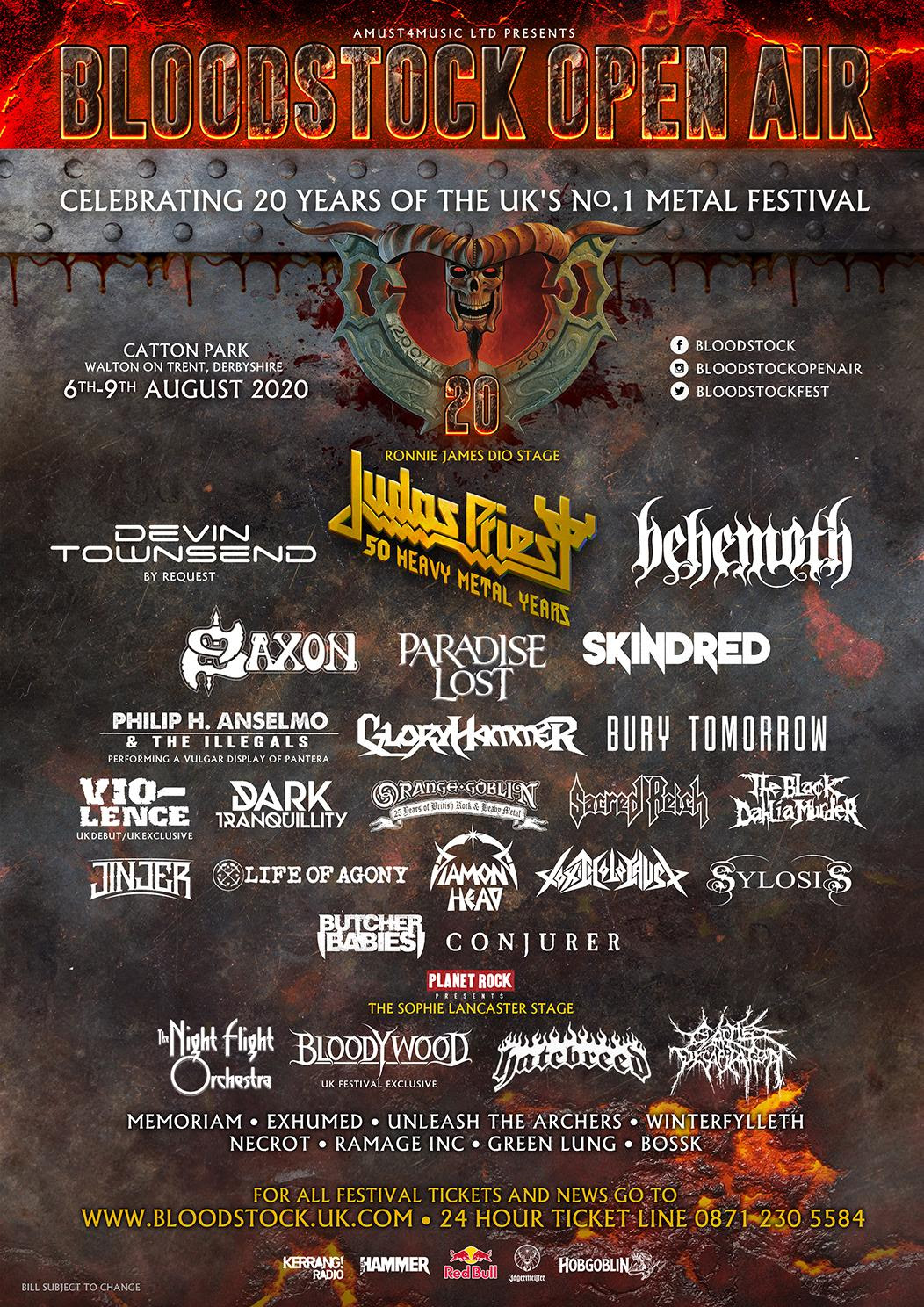 To get the new year underway Bloodstock announce 7 more bands for the event to be held once again at Catton Hall Derbyshire the weekend of August 6 to 9. In this we have 3 announcements for the main stage named after legend Ronnie James Dio and normally just referred to as the Dio and 4 for the main tent stage named as a tribute to a young rock fan who was murdered due to the way she looked called Sophie Lancaster which of course mostly gets called the Sophie for short. There are 2 new bands for Friday, 4 for Saturday and 1 for Sunday and that is the headliner for the Sophie. There is a mix of styles from death metal to thrash, hardcore, metalcore and punk! Let’s start with the headliner…

Sunday night Sophie headliner are festival regulars Hatebreed. The band have played 3 times before with frontman Jamey Jasta having played 4 due to a solo show with guests and friends (including Dino Cazares, Kirk Windstein and Howard Jones amongst others) about 3 years ago. With a mix of punk, thrash and hardcore this Connecticut outfit are taking on their first headline slot at the 2020 event. A new album is due out on Nuclear Blast Records some point in spring which will be their first in 4 years since The Concrete Confessional.

Moving to Saturday bands and starting with the new additions to the Dio stage we have making their very first appearance at Bloodstock from Hampshire metalcore crew Bury Tomorrow. These guys have been around for 14 years and have played a number of festivals including Leeds/Reading. It is definitely time for them to play the home of metal in Derbyshire. Amazingly there has only ever been one change in the line up in all that time which shows a fair amount of dedication and friendship. Their sixth album is coming this year (April) called Cannibal. 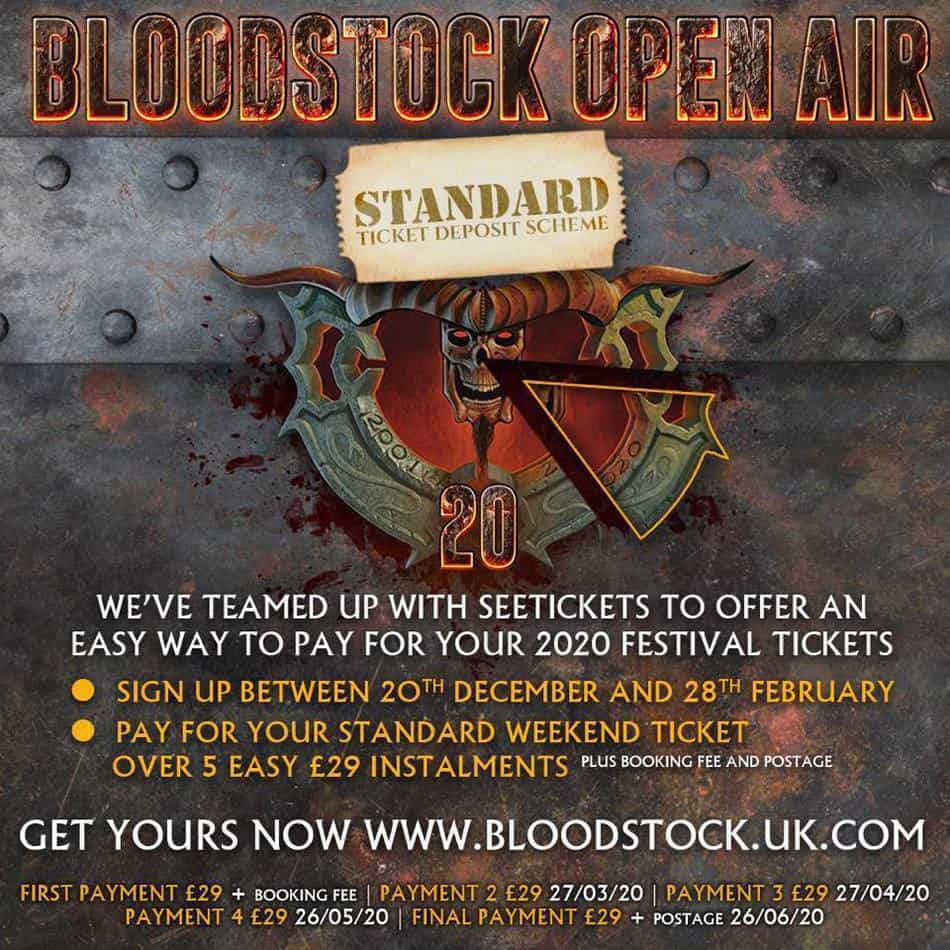 Also, Dio Saturday are Reading-based outfit Sylosis. They have been on hiatus for a few years due to guitarist (and now also singer) Josh Middleton putting a stop on things while he helped out friends in Architects when guitarist Tom Searle tragically lost his battle with cancer at the all too young age of 28! Whilst working with them he was also busy writing new stuff which helps make up the new album due out next month (February) called Cycle Of Suffering. He says he feels that he can explore new boundaries in style and writing due to the break. It is a mix of modern sounding metal, thrash and prog but with more melody and hooks whilst still being intense, check the YouTube footage at the bottom of this news article.

Also mainstage Saturday are thrashers Toxic Holocaust from Oregon USA. The band is really the work of one man Joel Grind who seems to play most of the instruments on the albums. Live they are a three-piece with Joel being singer and bassist and they give off a lot of Motorhead vibes. So saying that they are I suppose, “rock ‘n’ roll”! Their latest album Primal Future came out last year.

Staying on Saturday but moving to the Sophie we have Manchester “English heritage black metal” (their words) Winterfylleth (meaning winter full moon). They are dark black and quite incessant with many of the tracks being quite long. Their last album was more acoustic a bit like what Opeth did with Damnation but they say the next album will be back to the more black metal sound. Bloodstock was the first festival to put them on away back in 2012 and they have played a couple of times since then. The band speaks about how much they love the festival whether as performers or fans going to watch others. There is that kind of camaraderie at Bloodstock with bands also being fans and growing with the festival.

Moving to Friday we have 2 announcements both for the Sophie tent and both from California USA. First up is Exhumed a death metal outfit centred around vocalist/guitarist Matt Harvey. They have been around since 1990 although there was a 5-year break between 2005 and 2010. He says that it allowed him to go at things afresh after the break. For me, I like the album Death Revenge as it is all about a historical period in Edinburgh my hometown. It tells the story of Dr. Knox, Burke and Hare, the body snatchers who decided that digging up graves was too much work so started killing for bodies instead! They might be nasty and brutal sounding but they are also educational.

Finally, we have a three-piece called Necrot. I couldn’t find out much about them (I looked) but they refer to themselves as death metal punk. From the footage I watched, they are old school death metal but also have a slight prog vibe on the guitar solos. Sounded pretty good to my ears.

The event will be held next August 6 to 9.

Firefest was a well-loved and respected festival event in the UK. After about 10 events, 2014 was deemed The Final Fling and Firefest was laid to rest. Two CGCM Rock Radio contributors, Rich “The Meister” Dillon and Shawn “Animalize” Irwin (at the time they were writing and photographing for Decibel Geek) had the pleasure of […]