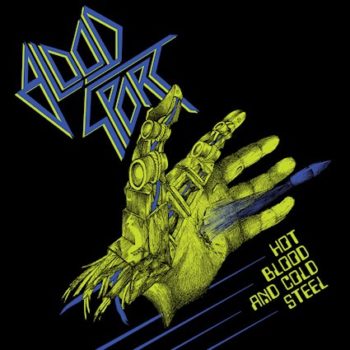 The remastered vinyl release of six-song EP from one of Scandinavia’s brashest new bands, Hot Blood and Cold Steel immediately establishes Blood Sport as a speed metal force to be reckoned with!

The reason behind Blood Sport’s 2020 formation was simple: They felt there wasn’t enough speed metal in the scene and wanted to be the ones to do something about it. They took action last summer when the world was in lockdown and created a speed metal monolith. Holed up in their own Metal System Studios in their native Finland, the band cranked out four ranging bangers of speed metal glory, “Steel System,” “Agitator,” “Niterider” and “Blood Sports.”

Within no time at all, the metal underground took notice. So did Gates of Hell Records, who signed Blood Sport and will release the band’s debut Hot Blood and Cold Steel EP.

Self-described as the “hyperactive bastard child of Judas Priest and Venom,” Blood Sport also leans into Show No Mercy-era Slayer for inspiration. The Finns ably combine all three bands on Hot Blood and Cold Steel, boasting a vast array of fleet-of-foot riffing, rafter-reaching vocals and blazing drum work that effortlessly recaptures the glory that originated in the 1980s. While retro in production and approach, Blood Sport has opted to avoid typical, predictable lyrical tropes in favor of science fiction themes related to defining the line between good and evil.

History has revealed numerous speed and thrash metal bands that started fast and ferocious only to eventually “soften” their sound. Rest assured, Blood Sport will never commit the cardinal sin of their predecessors: No ballads will ever be committed to tape.