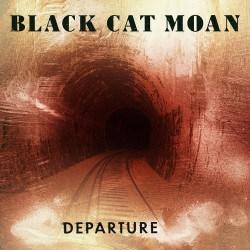 Departure is the first release of Black Cat Moan’s new material, following a long hiatus since releasing their debut album. Most tracks are straightforward rock numbers but the diversity of the band’s material also comes across in songs like the title track. All tracks are written by Black Cat Moan except for the final track “Lonely You” which is a cover of UK’s Badfinger, originally released in 1974.

In 1991, Black Cat Moan released their highly acclaimed eponymous debut album. As stated by Kerrang! when the album was released, “Black Cat Moan trade in ample, sumptuous riffs, sewn by professional hands into a bed of powerful chord progressions and melodies”. Recorded in Norway, the album’s 70th-inspired blues-based hard rock received great reviews in Scandinavia and abroad. “One of Swedish hard rock’s best debut albums ever” according to one of its reviews.

Upon release of the album, the band toured extensively in Sweden and established a strong following. However, during the recording of the follow-up album, their record label ran into financial difficulties and the recording was never completed. The band carried on, touring and writing new material, but a few years later the band was put on hold, except for giving a few reunion concerts.

During the time when the band was put on hold, the love for the band and its music always remained, and in 2018 the founding members Lars Isaksson, Jörgen Lantto and Bo Åström started to write and record new material, similar in style as the debut album but simply better on all accounts.