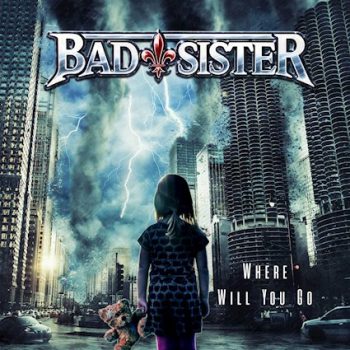 BAD SISTER – Where Will You Go

Bad Sister was founded in 1980 in Hamburg. During the ’80s and ’90s the AOR and melodic hard rock band played countless shows. For example, the famous Onkel Pö in Hamburg.

In 1989 Bad Sister released their first CD Heartbreaker which was sold all around the world and is estimated among critics as a classic album of AOR. The first single released from this album was “Catriona”. The band supported Deep Purple singer Ian Gillan and Detroit-based rock shouter Mitch Ryder.

Out Of The Business was released in 1991 in Europe, USA und Japan. Many shows and open-air festivals followed incl. several performances at Wacken Open Air.

Bad Sister are now set to release Where Will You Go – 13 great AOR and melodic hard rock songs which were produced by Kai-Ove Kessler at Hammaburg Studios, Hamburg and mixed at Wellenschmiede, Hamburg by Timo Höcke. “It’s our best album so far”, says singer Andrea Löhndorf.

The first single and music video is called “Lose Or Win”, a powerful eighties-style hard rock smash hit: pure and straight. “Feels Like Love”, a classic AOR track, offers pure energy with driving guitar riffs and great choir singing whilst “Couldn’t Do Right” pleases with its earthy guitars, melodic keyboards, harmonic voices and a chorus that stays on your mind.

“Fair Enough” is another example of showing the passion of this band: rough guitars, powerful keyboards and a catchy hook. And “Moon Woman” is an emotional ballad with a melodic chorus and supported by a guitar solo that gets under your skin.

“Lose Or Win” is the first video and an single from BAD SISTER’s November 25th album release “Where Will You Go” via Pride & Joy Music! BAD SISTER was founded in 1980 in Hamburg. During the 80’s and 90’s the AOR and melodic hard rock band played countless shows – for example famous “Onkel Pö” in Hamburg.

Upcoming ReleasesBad Sister, Where Will You Go