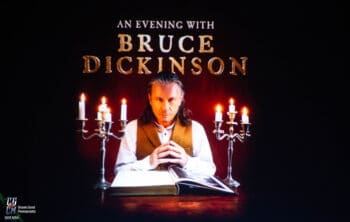 I assume it was not a normal crowd for the Winspear Center as it was a sea of guys and girls in black Leather, torn jeans, and many Iron Maiden fans adorned in Iron Maiden concert t-shirts. The venue staff was well organized and helpful. Stepping into the theatre there wasn’t a bad seat in the house. As the lights dimmed and went out, the crowd erupted and welcomed Bruce Dickinson to the stage. Bruce Dickinson’s entrance to the cheering fans looked very relaxed donning a black t-shirt and black pants. He looked as comfortable as ever even though this is not the normal setting. He is used to a large stage with 20,000 + Iron Maiden fans losing their minds as the band strikes the first chords to their opening song. 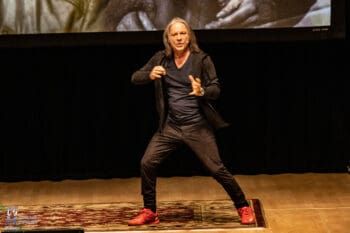 The stories Bruce Dickinson told last night brought Iron Maiden fans into the close and personal side of the life of Bruce. He enlightened fans with stories of his growing up in England. He also talked in great depth of becoming a commercial pilot and his inspirational uncle that had served and flown in the RCAF.  He also let fans into his life as a student and getting into trouble with the head dean of the school, for details I will not go into and spoil the storytelling at the show. He reminisced about joining the new wave heavy metal band Samson in 1979. He enlightened fans last night of stories of the beginning in Samson and the antics of the drummer “Thunderstick” a.k.a Barry Graham Purkis who was influenced by the likes of Gene Simmons and many more. “Thunderstick” was quite an interesting character.

Bruce enlightened the crowd on starting out as an opening act with the band Iron Maiden and only being on stage for short periods of time. Then being on days off, the kinds of troubles they would get into, the things they would bring into hotel rooms or onto planes trying to ward off the boredom. Mr. Dickinson’s stories on the early days of touring and trials and tribulations of lawyers and accountants during this time period was too hilarious. Bruce delved into his battle with cancer during the storytelling and how he dealt with being told of the diagnosis, how it impacted Iron Maiden and how he went to some jungle to do a photoshoot that replicated one from the early days. Bruce questioned many of his clothing choices throughout his touring career. Bruce told many stories of his bandmate Nicko Mcbrain and the troubles they have seen in touring in some areas of the world and recording albums in the middle of nowhere. All I will say is you have to see the imitation Bruce does of Nicko as it seems pretty accurate. I am not going to spoil the show but you have to hear the story of the Russian Security Guard and how he was going to show the band a proper woman. 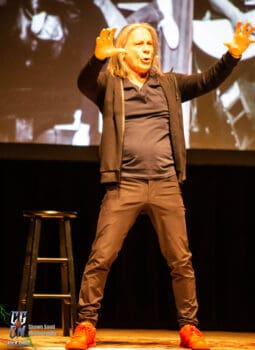 Mr. Dickinson took a 25-minute set break where the fans were entertained by the song “Writing On The Wall” from the current Iron Maiden release Senjutsu on an overhead screen. After the short break, Bruce made his way back to the stage, stopping to pour himself a nice tall glass of Iron Maiden Beer. Once back on stage to delight the crowd he answered many questions from the crowd that were previously submitted.  In all, it was a great way to spend an evening with family, friends and loved ones as we were all brought into an intimate setting and heard many great stories from Mr. Dickinson, lead singer of Iron Maiden, pilot and fencing contender.