Buckcherry had the daunting task of opening for Alice Cooper on April 14th, 2022 at the Winsport Arena. The true diehards for Buckcherry showed up to support the opening act at a 7:35 pm showtime.

Buckcherry’s first song of the evening was “54321” from their newest release, followed by the more popular “So Hot”. Frontman Josh Todd carried the crowd momentum with “Ridin” followed by “Out Of Line”. Buckcherry geared the fans up for the next tune which is a favourite “Lit UP” and one of Buckcherry’s more known radio hits. Josh Todd kept his foot on the gas and kept the crowd going with “Hellbound” again a newer track from their most recent release followed by the track “Somebody Fucked With Me”.

Buckcherry ended the night with two classic Buckcherry tracks, the ever-popular “Sorry” and then Josh Todd played to the Calgary audience and did a short rendition of Bryan Adams‘s “Summer Of 69”. And ended the evening with the crowd favourite and most anticipated song from the band’s back catalogue “Crazy Bitch”. 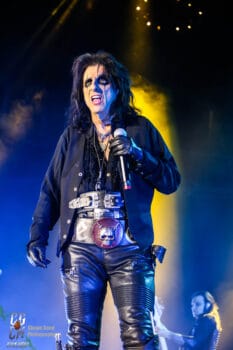 Alice Cooper brought the Detroit Muscle 2022 Tour to the Winsport Arena on April 14th,2022 Calgary, Alberta. Nothing seems to be slowing this juggernaut down, they have been on this leg of the tour for approximately 20 dates and are attacking every show with the same passion and energy as the first. Nothing seems to be slowing Alice Cooper and his band down, as I attended 3 shows on the current tour I can feel my ass dragging, the awesome production group extended an offer to join on more shows. I had to politely decline but said may join up again in the near future to review and photograph this ongoing and growing tour. 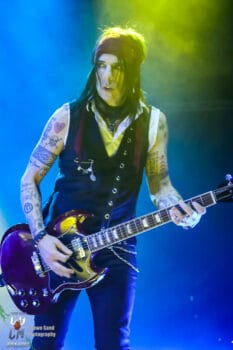 As the lights go down and you see the glowing red eyes of Alice Cooper on the stage curtain the crowd erupts and you can feel the energy building. The first chords are struck to the opening song “Feed My Frankenstein”. The doors to Castle Alice open and emerges Alice Cooper looking dapper in ¾ length coat, top hat and a cane as he strolls the stage back and forth. They follow that up with “No More Mr. Nice Guy”, the energy is maintained by the track “Bed Of Nails”, and then “Hey Stoopid”.  The band rips into the Cooper classics of “Fallen In Love”, and “Be My Lover”. Alice treated the Calgary crowd to a new track off his most recent release Detroit Stories, “Go Man Go” which fits well and falls into place with another classic track “Under My Wheels”. By the look of the band, no time soon will the wheels fall off this group of musicians.

Alice Cooper and his band keep the up-tempo of the night with the classic song “Man Behind The Mask” where we see Alice Cooper fend off Jason only after he takes a victim on top of the castle taking pictures. Followed by the song “Go To Hell” where Sheryl Cooper makes her first appearance on the stage for the evening donning a red wig and leather outfit with a bullwhip. The next songs were “Eighteen”, “Poison” and “Billion Dollar Babies” we see the giant billion-dollar baby bust through the castle wall and command a presence on stage. 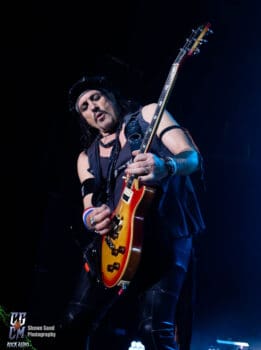 As the stage goes dark the castle is dimly lit by lanterns on the castle wall you see a spotlight pierce the darkness where we find a Nita Strauss cloaked atop the castle. Nita starts to hit chords on the guitar, starts to make her way down the stairs of the castle and makes her way to center stage. As the shredding of the guitar continues, Nita reveals herself from the mask that has been hiding her identity. The guitar solo leads into the track “Roses On White Lace” where we again see Sheryl Cooper on stage dressed in a white lace dress with bloodstains. The band then leads into “My Stars”, “Devil’s Food”, and “Black Widow”.

As the stage goes dark, Glen Sobel leads into his drum solo, and it does show off why he has been deemed one of the best drummers of all time. Next, we see Alice being led out from behind the castle doors in a straight jacket, by two large “Babies” as they lead into the song “Steven”, then “Dead Babies/I Love The Dead” at this point we see Alice Cooper captured and placed in the guillotine where he loses his head to Sheryl Cooper’s character. Alice comes back for one last song “Escape” donning the straight jacket. 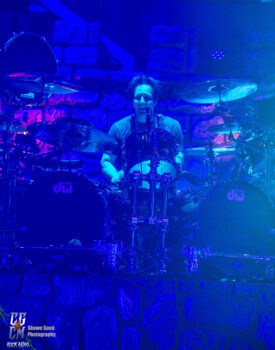 The band ends the night with two classic songs. “Teenage Frankenstein” where Alice Cooper comes out wearing a ¾ length jacket with a shrunken head on the shoulder. It looks like a ringmaster’s coat. Alice Cooper torments at first Nita Strauss chasing her on the elevated platform, followed by Tommy Henriksen, and then Ryan Roxie turns the tables on Alice Cooper by coming armed with a lantern on the end of his guitar, but Alice outsmarts Ryan Roxie and turns off the lantern and begins the chase again. The crowd then sees “Frankenstein” emerge from the shadows and take the stage. By the end of the song Alice is holding the chains that bound “Teenage Frankenstein”.

The final encore of the night is “Schools Out/Brick In The Wall”. The encore has the crowd covered in streamers, and bubbles stream from the stage, and then Alice Cooper, wielding a knife and sword, starts to pop the large balloons filled with confetti. Alice introduces the Edmonton crowd to his band and shares the spotlight with them in the final song of the night.