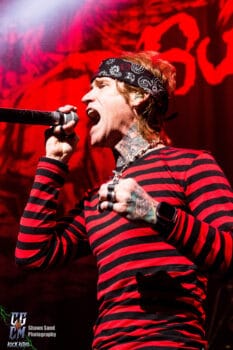 Buckcherry had the hard job of warming up the crowd on Saturday night April 9th,2022. The crowd that flooded into the arena when the doors opened was there to see Alice Cooper on the spring/summer Leg of the Detroit Muscle Tour 2022. Buckcherry went on stage @ 7:30 and they opened up the set with the track “54321” followed by the tracks “So Hot”, “Ridin” and “Out Of Line”.  Josh Todd had endless amounts of energy bouncing from one side of the stage to the other. Josh Todd can keep the fans enthralled with his energetic dance moves on the stage.

Buckcherry followed up the first few songs with the crowd-pleaser “Lit Up”. The band ran into the next song “Hellbound” full of fury this was met with the song “Somebody Fucked With Me”.

One of the last 2 songs from Buckcherry’s setlist was “Sorry”, an earlier of Buckcherry’s hits. The last song of the evening was “Crazy Bitch” Buckcherry’s biggest hit to date. The band made an 11-minute mash of the song to keep the crowd on its feet. 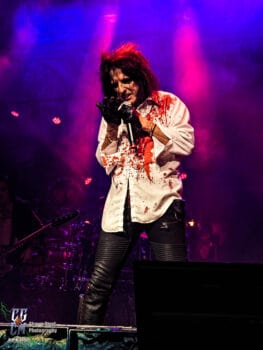 The stage was cloaked in darkness all that could be seen were the iconic trademark Alice Cooper eyes. As the lights went down at 8:45pm the arena erupted as the first chords were struck to “Feed My Frankenstein”. Alice emerged from behind closed doors from “Castle Alice” as the fog billowed forth. Alice and his band tore into “Feed My Frankenstein” like a well-oiled machine. The band started this leg of the tour on March 18th, 2022 making Winnipeg the 17th show on this leg of the tour. The energy didn’t stop as Alice and his touring band kept their foot on the gas pedal cruising through classic Alice Cooper favourites such as “No More Mr. Nice Guy”, ”Bed Of Nails”, ”Hey Stoopid”, “Fallen In Love”, and “Be My Lover”.

Mr. Cooper even threw in “Go Man Go” from his most current release Detroit Stories which fits great into the setlist as the band attacks “Under My Wheels”, “He’s Back (The Man Behind The Mask)”, “Go To Hell”, where we see the debut of Sheryl Cooper into tonight’s show, “I’m Eighteen”, “Poison”, and “Billion Dollar Babies”.

A spotlight pierces the darkness of the stage atop of “Castle Alice”, a dark cloaked mysterious figure stands atop the castle. The first chords of a guitar solo are struck and a mysterious figure starts to make its way down the stairs of the castle all the time delighting the fans with some guitar shredding. The figure makes its way to center stage to reveal its identity, and it is guitarist Nita Strauss who has been named “Guitarist Of The Decade” by Guitar World Magazine. She blazes her solo leading into “Roses On White Lace” where again we are delighted to see the return of Sheryl Cooper adorned in a white wedding dress. 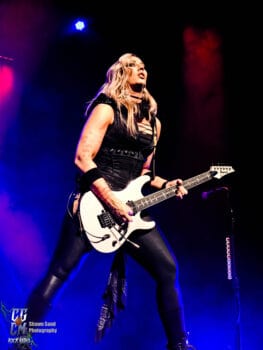 “My Stars”, “Devils Food”, and “Black Widow” followed by an amazing drum solo by Glen Sobel. Alice Cooper then is brought forth in a straightjacket by what appears to be two large babies as he tears into the eerie classic “Steven” followed by “Dead Babies”, and “I Love The Dead” where we see the guillotine and Alice loses his head and its paraded around the stage. We are brought back to an Alice Cooper looking insane and cranking out the lyrics to “Escape” as he is still adorned in his straight jacket. Following a quick wardrobe change, we get to hear the classic “Teenage Frankenstein” as Alice is wearing a classic top hat and ¾ length jacket looking like a carnival ringmaster, chasing the band all over the stage.

The encore of the evening is the classic “School’s Out/Brick In The Wall”. The show ends with an amazing display of streamers followed by large balloons filled with confetti where Alice wields his sword and knife and pops the balloons to release the confetti into the crowd. Alice introduces his amazing touring band and shares the spotlight with them.