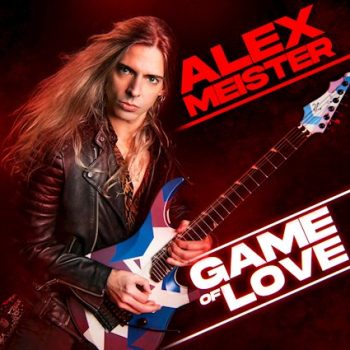 Meister comments: “This single will bring you back at the time when guitars mixed to sing-along choruses ruled the world.”

The upcoming album, Rock And A Hard Place, is the 6th of the Guitarist/Songwriters career and promises to be just what the doctor ordered if you love hair metal and arena rock.

Alex Meister has been a guitarist for over 30 years and has worked as a teacher for just over 20. He went to expression bands in Rio de Janeiro in the 90s until he became a member of the Heavy Metal band Thoten, with whom he performed several times in Brazil, including the opening show for the American band Savatage in 1998. He has also performed in the Gods Of Metal Festival in Milan, Italy, alongside Whitesnake, Motörhead, Queensrÿche, Saxon and Angra, in 2003. During his time at the festival, he was interviewed by Italian MTV.

During his career, he has edited five CDs inside and outside of Brazil; An instrumental/solo (Alex Meister My Way in 2011), three with the Hard Rock band Pleasure Maker (Love On the Rocks in 2004, Twisted Desire in 2008 and Dancin’ With Danger in 2018) and his recent project Marenna-Meister (Out of Reach in 2020). In addition to being the guitarist, Alex also acted as the main composer and producer for all of the mentioned works.

In 2019 Meister released two singles for different projects, marking a new phase of his career and ending the cycle of the band Pleasure Maker after more than 15 years on the road. The first single, “Just Thinkin ‘About You,” reprised his solo career and debut on lead vocals. That was accompanied by the re-recording the track “Love On The Rocks,” which opened the doors for his debut album. The second single, “Follow Me Up,” with the new project Marenna-Meister, culminated in the signing of the contract with the label Lions Pride Music (Denmark) for the worldwide release of their 5th CD Out of Reach on September 28th, 2020.

Alex has also made appearances recording songs by other artists and bands such as the project, Paradise Inc. from São Paulo.  Alex contributed in a work with several guests such as Mark Boals (ex-Yngwie Malmsteen) and shared the guitars with Edu Ardanuy (Dr. Sin) on the single “Secrets.” He also appeared in 2016 with Argentine vocalist Alec Michels, on the single “Sacrifice,” which is part of Michel‘s solo album Marcado A Sangre.   This lead to Alex performing twice in Buenos Aires (Argentina), for the dissemination of this work in the same year and also gave interviews to websites and specialized magazines. Together with all the work, he also served as a technical reviewer of books on methods for guitar for some Brazilian publishers.

The new Alex Meister album is slated for a December 14th release with several singles releasing over the coming months as preambles to the album launch.