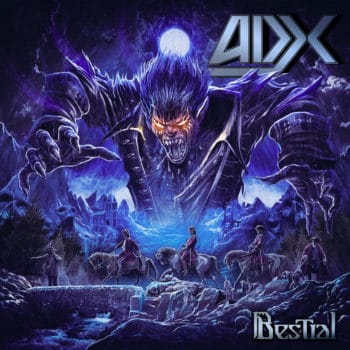 ADX are a new name on me. As there was no information with the stream that was sent I had to go googling to try and get some background about them. They are supposedly “speed metal” however on listening to the album they are more varied than that. The band originates from Paris, France. They have been around since 1982 with their first album coming out in 1985! The only mainstays it seems are singer Phil Greland and drummer Didier “Dog” Bouchard. They have had a couple of periods of inactivity and at the moment have been live as such since 2010.

Bestial is the third album with the same line-up. Pretty quickly I sensed they were more than just “speed” as they have elements of NWOBHM as well as hints of prog in what they do. They can also write slower numbers with more atmosphere so they are not only about “speed”. I am not sure if there is an actual theme through the album, or perhaps through a section of it. The reason being that there are a couple of spoken word sections seeming to tie some tracks together. Sadly my high school French only taught me useless stuff like “The cat sat on the mat” so I have no idea what it is all about!

Taking out the 2 spoken word pieces and the short intro there are 11 tracks of good quality metal. Plenty of fast riffs mixed with slower grinding stompers with solos in abundance. I will pick my highlights and on each song will put in the google translation from French in brackets after the French title, this may mean any French speakers will find this article hilarious, but at least maybe it gives us non-speakers a chance to perhaps know what the songs are about. Apologies in advance!

A Little About The Songs: 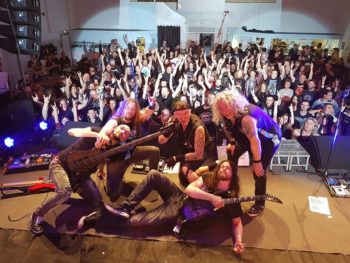 ADX – In front of an adoring crowd!

The first real song “Au-dessus Des Croix Noires” (Above The Black Crosses) has a real Iron Maiden sound especially with the guitar harmonies and some early Helloween on the actual guitar solos whilst still sounding fresh and new. The rhythm section are effective and in this song have some nice little moments of interplay between vocals. In general, they push things along and within the song, there are a few little changes in pace to keep it interesting. It is good old fashioned metal and there is nothing wrong with that especially when done this well.

“Les Sanguinaires” (The Bloodthirsty) is probably my favourite track on the album. With a creepy opening, with what sounds like small children singing a little song/nursery rhyme (probably) with some manic laughing until the band kicks in. There is a punk edge to this, plenty of energy and singer Phil Greland spits the lyrics out with some venom. The guitar motif that pops in several times adds to the strangeness and atmosphere of dread. There is more crazy laughter before the solos and at the end. Again there is plenty of variety in the track with some fine drum fills to headbang along to. It is a really good song even if I have no idea what it is about. Let your imagination fill in where the language fails. It works nicely!

Another strong track is “La Marche Des Spectres” (The March Of Spectrums) which steams along nicely with an infectious chorus (musically along with lyrically I imagine). A steady groove through much of the song with tasty guitar solos, one little section even reminding me of Jeff Waters from Annihilator. The riff at the end is terrific leaving you wanting more. I love the intro to “Action Cannibale” (no surprises it appears to be “Action Cannibal”) with its ominous guitar sound and drum rolls befitting the probable lyrics. It has a chorus even I can sing, yes very easy! 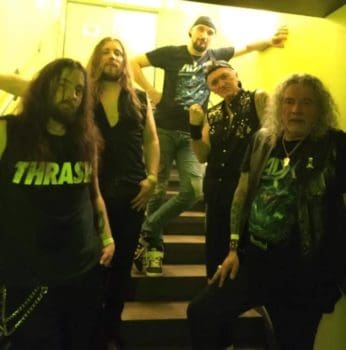 “Du Sang Sur Les Pierres” (Blood On The Stones) has a folky feel to it at the start especially. With the plaintiff vocal being in French it is quite beguiling. Of course, it kicks into a heavier track with a few time changes and speeds up on the solos near the end. Like a number of tracks, this is nicely constructed and beautifully executed metal. Possibly my favourite guitar soloing is on “La Traque” (The Hunt). It is quite a thrashy number as such, has a particularly strong riff and yet still manages some diversity in it. This is another with a fun drum-based ending.

The last song “Le Mensonge” (The Lie) is quite theatrical and reminded me of Nevermore at points, especially with the vocal. I quite like when the vocals are placed around guitar riffs placing importance on them (even if I don’t understand them). It has a bass opening with the guitars joining in the riff. It is a chugger on the verses with a focus on uplifting melody at the chorus. All concluding with some spoken word which I wish I understood.

ADX you can tell on first listen are professional and can write melodies and riffs that get the head and feet going whilst having some creativity in a genre that it is difficult to be so. I wondered why they are not more famous, but my guess is that many of us English speakers are too lazy (or have been through the years) to accept bands singing in their own tongue. However in this day of Rammstein and many Scandinavian folk metal acts especially doing well, perhaps this is the time for the wider world to check out these guys and enjoy what they do. If you like old school NWOBHM mixed with speed and thrash played to a high standard with plenty of melody then do yourselves a favour and check these guys out. Might be a good addition to your musical collection!